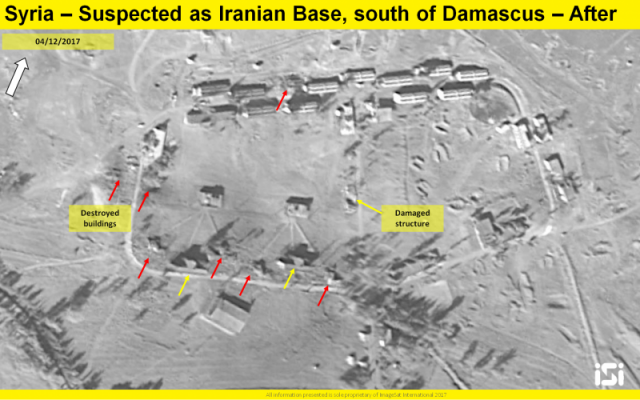 Source: The Times of Israel – by Judah Ari Gross (Satellite shows aftermath of alleged Israeli strike on Iranian base in Syria)

Satellite photos published Monday showed the aftermath of an alleged Israeli strike on a reported Iranian military base being constructed in Syria, some 50 kilometers (31 miles) from Israel’s northern border, indicating several building had been destroyed.

The images, provided by the Israeli satellite company, ImageSat International, show the destruction of seven buildings on the base at al-Qiswah, some 13 kilometers (8 miles) south of the Syrian capital of Damascus. Another three buildings were damaged. Most of the structures appear to be barracks and garages.

The photographs were taken on Monday afternoon by Israel’s EROS-B satellite, the company said.

A Sky News Arabic report said that the missiles were fired from within Lebanese airspace.

Some Arab media reports said 12 Iranian military personnel were killed in the strike.

A Lebanese news network affiliated with the Hezbollah terror group claimed that in the attack, Israel fired two Jericho 1 surface-to-surface missiles at the base, and that one of the missiles was downed by the Russian Pantsir-S1 air defense system.

If true, this would be the first reported operational use of the Jericho 1 ballistic missile. It is, however, an odd claim, as Israel possesses several other missile systems that are more suited to the range required for such a strike, for instance, the LORA.

The construction of the alleged Iranian base was first reported by the BBC last month, citing a Western intelligence official.

“The images of the base do not reveal any signs of large or unconventional weaponry, which means if it was a base, it would most likely be to house soldiers and vehicles,” the BBC said, quoting a source who said it was possible that senior Iranian military officials may have visited the compound in recent months.

Images of the base broadcast by the BBC showed “a series of two dozen large low-rise buildings, likely for housing soldiers and vehicles.”

According to the Israeli military analysis blog Intelli Times, the transport jeeps and trucks with attached rocket launchers seen in the footage were consistent with the types used by Iran-backed Shiite militias.

A few days later, ImageSat International took photographs, also with the EROS-B satellite of the site, which further supported the BBC claim.

Those satellite pictures suggested that one of the buildings on the base is a mosque. If it is, according to ISI’s intelligence unit, it likely pointed to the presence of Iranians or other foreign Muslims.

Yet ISI stressed that the assumption that the site was being used by Iranians was taken from foreign media reports, and that the images alone did not necessarily prove Iranian presence.

Israel has long warned that Iran is trying to establish a permanent presence in Syria as part of its efforts to control a land corridor from Iran through to the Mediterranean Sea as it attempts to expand its influence across the Middle East.

Prime Minister Benjamin Netanyahu has said often that Israel will not allow Iran to establish a permanent presence in Syria, and was reported late last month to have sent a warning to this effect via a third party to Syrian President Bashar Assad.

Israel, along with Sunni Muslim states in the region, has viewed with mounting concern Iranian expansionism in the Middle East, in Iraq, in Syria — with the backing of Russia — and through proxy groups, such as Hezbollah in Lebanon, Hamas in the Gaza Strip, and the Houthis in Yemen.

Last month, Russian Foreign Minister Sergey Lavrov said that a recently announced agreement on the terms of a ceasefire in Syria did not include a Russian commitment to ensure Iran-linked militias would be pulled out of the country.

He said that Iran maintained a “legitimate” presence in Syria, according to the Interfax news agency.

The statement came as officials from the US National Security Council flew into Israel for talks with security heads, primarily over the US-Russia agreement. They were expected to discuss Iran’s alleged construction of the military base at al-Kiswah.

Last month, Netanyahu announced that Israel would not be bound by the deal, which would somewhat distance Iranian proxies from the border with Israel. The agreement affirms a call for “the reduction, and ultimate elimination” of foreign fighters from southern Syria.

According to reports, the deal applies to Iranian proxies fighting on behalf of Assad’s regime, which would be required to leave the border area and eventually Syria.

But according to an unnamed Israeli official, under the deal, militias associated with Iran would be allowed to maintain positions as close as five to seven kilometers (3.1-4.3 miles) to the border in some areas, Reuters reported.