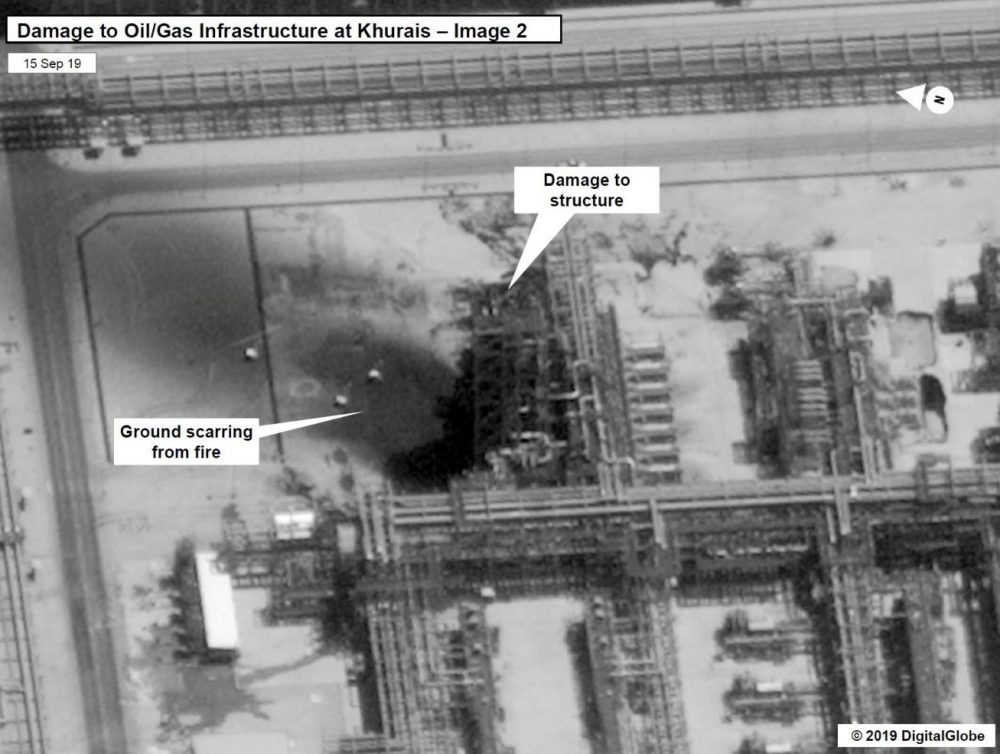 Iran Attacked Saudi Oil Facilities. What Will Trump Do?

September 16, 2019 1:37 pm 0
Israeli envoy: Nuclear Iran is a ‘thousand times’ more dangerous than ISIS
The Strategy of Isolating Iran is Underway
Some Wars Are Made to Watch

An attack on Saudi Arabia that triggered the biggest jump in oil prices in almost 30 years was carried out with Iranian weapons, a Saudi-led coalition said on Monday, as President Donald Trump said Washington was “locked and loaded” to hit back. If Iran attacked Saudi oil facilities, how will Trump respond to the threat?

HOW WILL TRUMP RESPOND?

But how Trump is going to respond remains a mystery. Many in Washington believe the President will dodge the issue instead of punishing Iran.

The Iran-aligned Houthi group that controls Yemen’s capital claimed responsibility for the attack, which knocked out more than half of Saudi Arabia’s oil production and damaged the world’s biggest crude processing plant.

Iran denied U.S. accusations it was to blame and said it was ready for “full-fledged war”. By calling for an all-out war, Iran hopes it will scare Trump, which actually might work.

A Saudi-led military alliance battling the Houthis said Iranian weapons caused the damage to Saudi oil plants. They were not launched from Yemen, according to preliminary findings.

By calling for an all-out war, Iran hopes it will scare Trump, which actually might work

Coalition spokesman Colonel Turki al-Malki said that an investigation into Saturday’s strikes, which shut 5% of world crude output, was going on to determine the launch location.

The preliminary results show that the weapons are Iranian and we are currently working to determine the location … The terrorist attack did not originate from Yemen as the Houthi militia claimed.

U.S. Ambassador to the U.S., Kelly Craft, told the Security Council that emerging information on the attacks “indicates that responsibility lies with Iran” and that there is no evidence the attack came from Yemen.

Iran has dismissed as “unacceptable” U.S. accusations that Tehran was responsible.

Oil prices surged by as much as 19% before coming off their peaks. The intraday jump was the biggest since the 1990-91 Gulf crisis over Iraq’s invasion of Kuwait.

Prices eased after Trump announced that he would release U.S. emergency supplies and producers said there were enough stocks stored up worldwide to make up for the shortfall. But traders still spoke of a long-term price increase as markets absorb a global supply shortage.

The United States wholeheartedly condemns Iran’s attack on Saudi Arabia and we call on other nations to do the same.

While Iran has denied blame for the attacks, its Yemeni allies have promised more strikes to come. Houthi military spokesman Yahya Sarea said the group carried out Saturday’s pre-dawn attack with drones.

We assure the Saudi regime that our long arm can reach any place we choose and at the time of our choosing. We warn companies and foreigners against being near the plants that we struck because they are still in our sights and could be hit at any moment.

U.S. officials say they believe that the attacks came from the opposite direction, possibly from Iran. The attacks may have involved cruise missiles. Wherever the starting geography of the attacks, however, they believe Iran is to blame.

The question remains: What will Trump do now?

Iran Attacked Saudi Oil Facilities. What Will Trump Do?