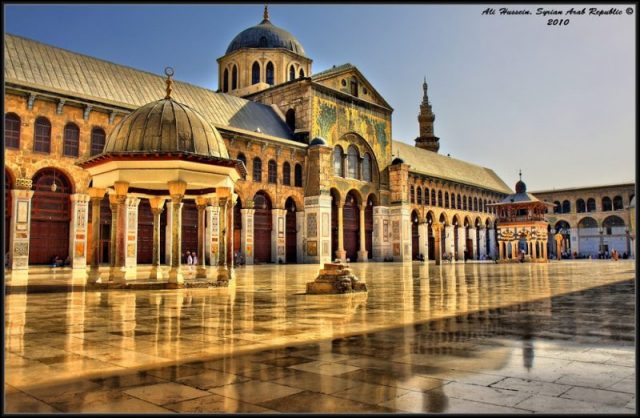 Speaking of Ignorance of Muslim History

We have warned on several occasions about the reasons why Damascus is an important religious symbol to plant the roots of a Sunni Caliphate. Anyone with 8th grade level knowledge of Muslim history and the rise of the Umayyad Dynasty that further cemented Sunni power over the region and the Shia faith would be foolish not to grasp the meaning of the war in Syria.

Not only the Mullahs in Iran see it as a threat to their own self-existence, but in light of al-Qaeda’s rise, the US and Western Europe would be ill-advised not to see the threat of the upcoming religious wars that will suck them in no matter how disengaged they are.

In Denmark alone, some 30 Danish Muslims have joined al-Qaeda in Syria to fight the Shia of Iran and eventually turn their attention against the Western world. Already, Jordanian authorities captured a Syrian woman refugee yesterday trying to enter the Kingdom wearing a belt of explosives, which sealed the Jordanian borders to all Syrians.

A No-Fly Zone for Syria is not an option, it has become a necessity with national security implications.

Instead of prevention, the Obama Administration is engaged into a campaign to deny reality because Obama’s foreign policy experts are ignorant of Muslim history. With every passing day, the danger grows stronger and more potent. Does anyone from the Chicago circles of Obama understand the real Muslim History?

By denouncing Jabhat al-Nusra (JAN) as a terrorist organization when JAN was filling the void Syrians hoped the US would fill by arming the FSA to defeat Assad; and when JAN was providing food and basic necessities to the civilian population, Barack Obama had turned Syrians against the US. Whomever provided that advice to the President (Is that you Ben Rhodes?), or to Hillary Clinton, ought to resign his/her post immediately. Such ill-timed stupidity at a time when the US refuses to help the Syrian people free themselves reek of either naivete in international politics or lack of common sense.

The US would have fared far better in fighting terror if it also aided those the terrorists needed, in the Syrian people, to oxygenate their cause with. To label JAN a terrorist organization and simultaneously ignore the plight of the Syrian people is as demented a policy as we have ever seen.

Instead of learning, Obama is piling up the mistakes. Al-Qaeda is now deeply rooted in Syria not because of the number of fighters that keep joining every day, many of them Syrians who were studying law or history few months ago; however, because of what AQ has done to save the civilians from Assad’s terror, millions of ignorant Syrians now stand behind the very same organization that attacked the US on 9/11. Obama could not have done a worse job even by design.

Unlike the Libyans who chased al-Qaeda after the senseless and cowardly murder of Ambassador Stevens, Syrians will not duplicate. They will be chasing Ambassador Ford, the official representative of President Obama who was forced to the sidelines by Obama’s inner circle. Ambassador Ford deserves better and so do many in the Foreign Service who pressed the President to expand the aid to include sophisticated weapons to the FSA but were silenced by Obama himself and political appointees who grew up in Chicago, stayed in Chicago, and Washington DC was their first international voyage.

For every problem, there is a solution. Here is ours to save whatever credibility the United States may have lost in Syria due to lack of understanding of Muslim history.

Short of correcting the course on Syria, history will correct it for us down the road at the cost of American lives and taxes. This will happen after hundreds of thousands of Syrians and possibly millions of Muslims die for no reason, which will turn the region into a center of hardened fundamentalist warriors with vengeance on their minds against anything western.

Speaking of Ignorance of Muslim History