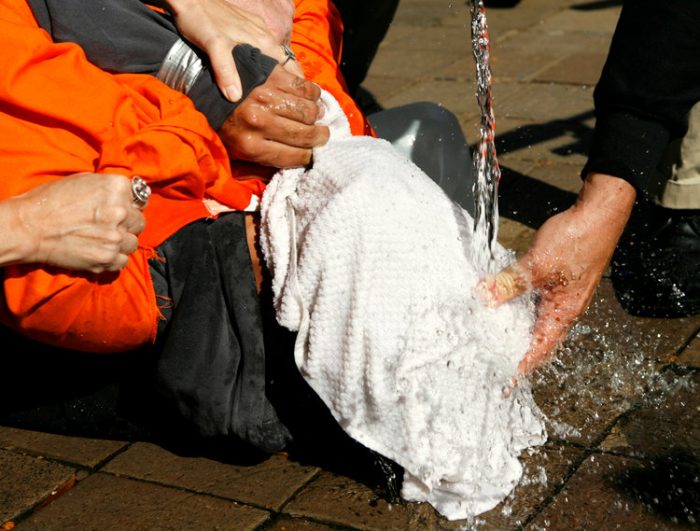 The policies of the weak Obama Administration have been responsible for stretching the death and destruction Assad has spread all over the country with no end in sight. Obama waterboarding the Syrian people with his reckless Syria policies.

Every time weak Obama has an opportunity, with significant gains on the ground by the Free Syrian Army, to end the conflict by advancing real military aid to defeat Assad, he lets it slip again and again. Obama, of all people, seems not to care too much about the death of Syrians. It almost seems he wants this conflict to go on for years.

What the President keeps losing sight of, other than the obvious of how much better off the region would be without the terror of Assad, is the tenacity of the regime, which demoralizes the very same people the United States is eager to see win. That’s the astonishing part about how wrong his policy on Syria has been. Weak Obama won’t even help decisively the FSA, only the Muslim Brotherhood, who cannot win this war; and if it does, it as disastrous to Syria as Assad has been.

Yesterday, Assad delivered another defiant speech to rally his troops, which Obama is ignoring. With a nod for slightly better weapons, the FSA would make further gains and simply take the matter to another standstill — because the weapons used are not enough to win the war– until another speech by Assad defying the international community or “Friends of Syria”.

When Assad started making gains against the Rebels, suddenly a very small number of anti-aircraft missiles surfaced in Syria to help the Rebels keep the balance.

Now that Assad delivered this speech, weak Obama will order just enough weapons to harm Assad a little bit, but not to take him out completely; until another speech by Assad couple of months later. And so on and so forth.

If this is not Obama waterboarding the Syrian people, I don’t know what is.

Obama is torturing the Syrian people just enough not to suffocate them, but not enough to end the conflict.

The Syrian people suffocating and dying seems not to enter any equation on Obama’s side or Putin’s. Everyone misses this common bond between the two men.

If Obama is hoping that Assad, under pressure, will rent a U-Haul and move to Latakya in order to create an independent Alawite-state, it won’t happen because the Alawites will kill him after committing them to an atrocious history, and so suddenly escape from his responsibilities. Besides, Assad is going nowhere before he kills as many Syrians and cleanse as many Muslim Sunnis with Putin cheering him on the sideline.

If Obama thinks that the killing of Syrians will somehow awaken Putin’s conscience, then the President should pay the Russian Gulags in Siberia a visit, after he reads a little history about Stalinism, the system which Putin graduated from.

If Obama thinks that he can pressure Israel, by giving the extremists in Syria time to consolidate and harden, then he should read about greater civilizations and far nastier people who tried to harm the Jews. Each and everyone failed miserably.

If Obama has a hidden agenda when it comes to Syria, beware what you wish for Mr. President and never forget that Damascus has been around since 8,000 BC.