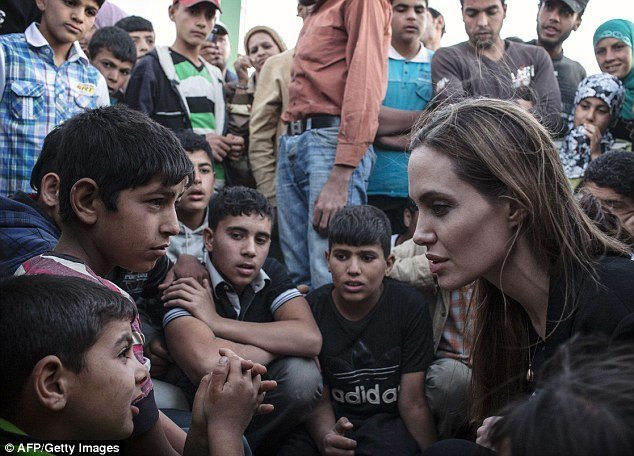 Syrian Refugee to Angelina Jolie: Why are we the Syrian people not worth saving?

To be a fellow Muslim refugee trying to reach America is the worst punishment mankind can inflict upon another. Muslims are neither welcomed, nor wanted by the wealthiest nation on earth.

America, for all the Democrats’ effort to highlight their support for the plight of the weak, has sealed its borders to Syrian refugees. Only 524 Syrians have been admitted since 2011. Thank you Barack Obama. Not only do you turn blind to the plight of others, but you also shut them out too.

However, neither Europe nor America have been stingy with their financial generosity. Europe has poured some €2 billion and the U.S. has committed over $3 billion so far to assist those countries, like Jordan, harboring refugees and as a donor to the U.N. relief efforts.

Why not more Syrian refugees are entering the US? Is it because they are Muslims?

A Syrian refugee told actress Angelina Jolie why are we the Syrian people not worth saving? Jolie mentioned it in her speech to the UN (Video below).

If the reason has to do with Islam, then again, who can blame some in the West for their position? Have Muslims not made matters worst by refusing to accept Christianity and Judaism in our midst? Have many not supported terror groups like Hamas and Hezbollah in their violent quest to annihilate Israel? If Islam has been far more accepting of other religions, more Syrian Muslim refugees would be welcomed not just in Jordan, Turkey, and Lebanon, but also in Washington, Paris, London, and Geneva.

Let this Syrian crisis be a lesson for Muslims and Islam in general. When you refuse others, others have the right to refuse you.

On that note, all Syrians thank Lebanon, Jordan, and Turkey for opening their doors to Syrian refugees. Without their safe havens, many more Syrians would have suffered a most distressed fate.

Angelina Jolie speech at the U.N. in support of the Syrian refugees

Syrian Refugee: Why are we the Syrian people not worth saving?