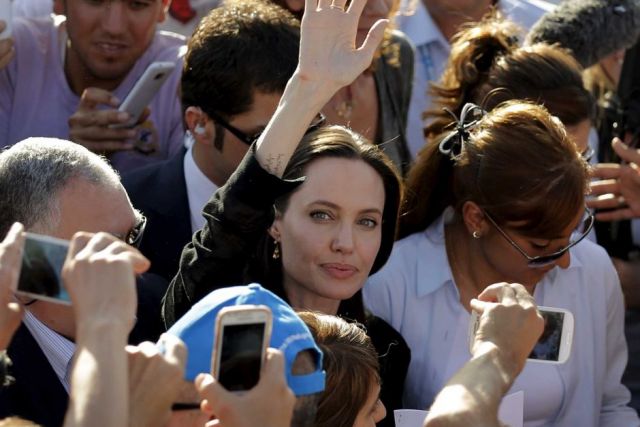 June 21, 2015 2:32 am 0
How Can You Not Love Angelina Jolie?
Angelina Jolie criticizes Obama for his leadership
Syrian Refugee to Angelina Jolie: Why are we the Syrian people not worth saving?

The Hollywood star and special envoy of the UN refugee agency visited the camp in Mardin on World Refugee Day with UNHCR chief Antonio Guterres, after meeting Turkish president Recep Tayyip Erdogan, who was also in the city.

“We are here for a simple reason: this region is at the epicentre of a global crisis,” Jolie said.

“We should call this what it is: not just a refugee crisis, but a crisis of global security and governance, that is manifesting itself in the worst refugee crisis ever recorded and a time of mass displacement,” she said.

Jolie and Mr Guterres’s visit came after the UN said that the number of people forcibly displaced by war, violence and persecution has soared to a record 59.5 million, half of them children.

The huge tide of displaced people has grown by 8.3 million since 2013 – the highest-ever increase in a single year.

“Displacement is multiplying because wars don’t end and countries emerging from conflict don’t get the support they need to recover and stabilise,” Jolie said.

“We handle crises by discussing either boots on the ground, or aid relief. The global crisis is showing us that this narrow view of dealing with conflict is wrong and it is ineffective. Angelina Jolie Pleads Global Action on Syria.

I plead to the international community and leaders of the world to recognise what this moment in mass human displacement means. This is not just another day.

The mother of six thanked Turkey and other countries who have provided shelter to large numbers of refugees.

Turkey has repeatedly complained that it has been left to shoulder an unfair burden.

Turkey now hosts more than two million refugees in total and it has spent more than $US6 billion on their accommodation since the conflict started in 2011. For that, Syrians will always be grateful to Turkey.

During her visit, Jolie met with Syrian refugees and heard how they had escaped their country.

On Friday, the actress and her eldest daughter had been in Lebanon, also to visit Syrian refugee camps.

Jolie has made several visits to countries neighbouring Syria since the war began.

An estimated 3.8 million people have fled Syria since the start of the uprising against president Bashar al-Assad and the subsequent sectarian violence between Islamist groups including al-Qaeda and Islamic State.

AFP and Reuters contributed to this article

Angelina Jolie criticizes Obama for his leadership
How Can You Not Love Angelina Jolie?
Syrian Refugee to Angelina Jolie: Why are we the Syrian people not worth saving?
Syria News 1210 Syrian Revolution 1352