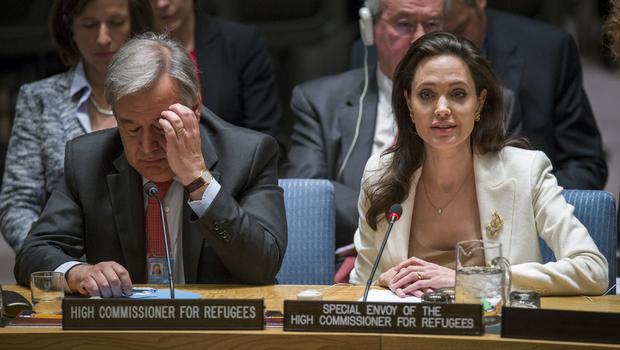 April 24, 2015 12:41 pm 0
Syrian Refugee to Angelina Jolie: Why are we the Syrian people not worth saving?
The bastards are stoning our women
How Can You Not Love Angelina Jolie?

UNITED NATIONS — Actress Angelina Jolie pleaded with world powers Friday to help the millions of Syrian refugees, sharply criticizing the U.N. Security Council for being paralyzed by its division over Syria’s four-year conflict.

Jolie brief the council as special envoy for the U.N. on refugee issues.

Nearly four million Syrians have fled the conflict into neighboring countries, which warn they are dangerously overstretched.

“We cannot look at Syria, and the evil that has arisen from the ashes of indecision, and think this is not the lowest point in the world’s inability to protect and defend the innocent,” Jolie said.

“We are standing by in Syria,” she said, adding that the council’s powers lie unused because its members cannot agree on how to address the conflict.

Jolie, who said she has made 11 visits to Syrian refugees in the region since the crisis began in 2011, called strongly for the political will to act.

Russia, a top Syria ally and backed by China, has vetoed multiple council resolutions on Syria, including an effort last year to refer the situation there to the International Criminal Court.

Jolie said the council must now “work as one,” and she said she would like to see the foreign minister of each of the 15 council members come to the table to negotiate a political solution.

She also urged council members to visit Syrian refugees and see the crisis for themselves.

In addition, Jolie spoke briefly about the rising migrant crisis on the Mediterranean, where more than 1,300 migrants fleeing Syria and other places have drowned at sea over the past three weeks.

“It is sickening to see thousands of refugees drowning on the doorstep of the world’s wealthiest continent,” she said. “No one risks the lives of their children in this way except out of utter desperation.”

In January, Jolie appealed for urgent funding to assist millions of displaced Iraqis and Syrians living in dire conditions in northern Iraq.

More than 3.8 million Syrians have fled to Turkey, Lebanon, Jordan, Iraq and Egypt, according to the UNHCR, while another 7.6 million Syrians are displaced inside the country. At least 1.8 million Iraqis were also displaced last year by violence triggered by the Sunni militant onslaught.

Angelina Jolie Pleads Global Action on Syria
Syrian Refugee to Angelina Jolie: Why are we the Syrian people not worth saving?
Michelle Obama, the ghost of Syria’s tragedy
Things That Matter 382