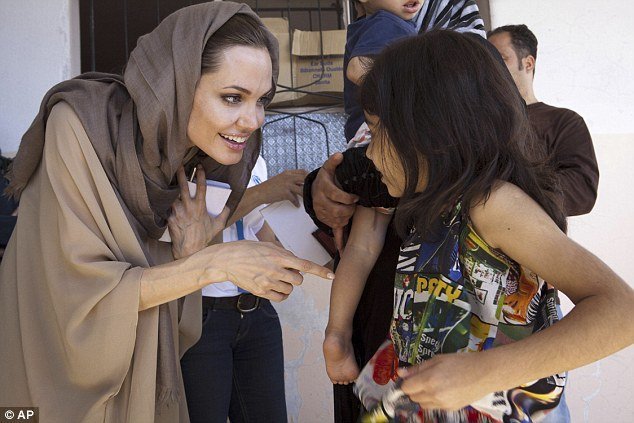 November 26, 2014 11:40 am 0
The bastards are stoning our women
Syrian Refugee to Angelina Jolie: Why are we the Syrian people not worth saving?
Angelina Jolie Pleads Global Action on Syria

In an interview with ITV TV, a UK-based media company, actress Angelina Jolie hammered the international community for its failure to stop the carnage in Syria calling it “a failing of international leadership”.

Even though this quote addresses no one country or one person in particular, when asked about Obama’s handling of the Syrian crisis, Jolie responded:

“I’m not here to criticise or pass judgment on a particular leader, including my own President, but I will say that we have overall a failing of international leadership when we have 51 million people displaced from conflict.”

While this is not a direct criticism of Barack Obama, indirectly Angelina Jolie criticizes Obama, as part of the international community, for 51 million displaced people around the world. It is not hard to miss her scorn for his six-year term in office where the Syrian crisis, on its own, added 11 million displaced Syrians.

Maybe, she is finally realizing, like the rest of America, that Barack Obama is a poison time capsule, slowly eating away at the fabric of this nation.

And maybe I am too much of an optimist, and Jolie still panders to her politically-correct Hollywood crowd. The title “Angelina Jolie criticizes Obama for his leadership” may be a wishful thinking.

Nonetheless, Jolie has done more for the children of Syria when Obama was playing golf and pretending all the children slept to the tune of lullabies. For that, all Syrians are thankful for her compassion and dedication.

Jolie’s father actor Jon Voigt is well known for his vocal opposition to the politics of Barack Obama. On Fox News, Voigt recently lashed out at Obama, and I quote, “Five years ago, I stated that Obama would take the country apart piece-by-piece, that he would cause a civil war in this country.”

Voigt’s interview aired on July 13, 2014. It is hard not to reflect upon these words as we watch Ferguson, Missouri burn when its citizens uphold its laws. Every town in America would need to have two sets of laws on the books going forward, one set for everyday citizen, and another set for the aggrieved would-be looters.

We are heading towards a civil war in this country if Obama continues on his path of destruction.

The bastards are stoning our women
How Can You Not Love Angelina Jolie?
Syrian Refugee to Angelina Jolie: Why are we the Syrian people not worth saving?
Slippery Barack Obama 976