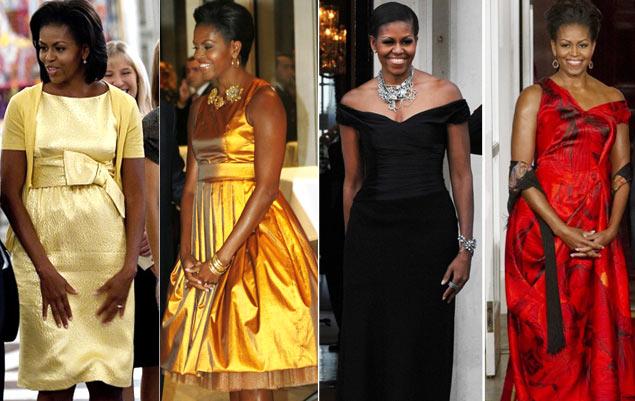 Here is a tale of four powerful women.

In Barack and Michelle Obama, we have a red line husband and a red lipstick wife when it comes to the welfare of others. One threatens and does not act and the other smiles without saying a word. Just ask Michelle Obama about fashion designers. She is quite brilliant at knowing what from whom in that field.

Here is one of her most famous quotes about a passionate subject of hers. You be the judge of whether her focus is presidential or not considering the difficulties of our times and the great injustices being committed against people all around the world during her husband’s tenure.

“We can make a commitment to promote vegetables and fruits and whole grains on every part of every menu. We can make portion sizes smaller and emphasize quality over quantity. And we can help create a culture – imagine this – where our kids ask for healthy options instead of resisting them.”

On the other hand, Angelina Jolie, Valerie Amos, and Ambassador Samantha Power, all three women, in their own ways, have tried to come to Syria’s assistance.

Today, Angelina Jolie blasted the U.N. for inaction on Syria. Jolie has visited Syrian refugee camps eleven times the last five years, which averages twice a year. It is rumored she and her husband, actor Brad Pitt, may adopt a Syrian child to save one life from the misery of existence. No other woman has done so much for the Syrian refugees, and carried the weight of the world on her shoulder as Angelina Jolie has. Who deserve more the Nobel Peace Prize, Barack Obama who watched the Syrian tragedy unfold without doing much to stop it or Angelina Jolie who tried, using her star power, to raise the issue of the suffering of the Syrian people to new heights?

Another responsible woman, Valerie Amos, who is the UN Under-Secretary-General for Humanitarian Affairs and Emergency Relief Coordinator, wrote an Op-Ed for the Washington Post decrying how “haunted” she is by the crisis in Syria as she prepares to leave her post at the end of May.When was the last time you heard Michelle Obama, the First Lady, saying she is haunted by one tragedy or another? Those dresses she seems to be so enchanted with must be her ghost whisperers. They keep her dreams down to the mundane.

Even Ambassador Samantha Power, who is an outsider in Obama’s inner circle, has been generous with her statements about the Syrian tragedy. Not that Syrians need more rhetoric and less action, but compared to Michelle Obama, Samantha Power is saintly. In reference to a testimony of a Syrian doctor about Assad’s chemical attacks, she was quoted as saying “There was not one dry eye in the room”. Also, Power has been critical of Russia and China for using their veto power even in cases where the aim was to limit humanitarian tragedies.

Four powerful women with four different responses, type of engagement, and perspectives related to the attributes of their humanities on a personal level. Of all four, none is worse than Michelle Obama’s lack of care and focus on the great questions of our times. If fashionable dresses make a woman feel complete, watching her husband fail miserably at helping the Syrian people must make Michelle Obama feel guilt. Enough to avoid the subject all together instead of showing more leadership than her husband when it comes to the really difficult issues of our times.

Maybe her daughters would grow up to really help people rather than ignoring them as Michelle Obama has done.

Angelina Jolie blasts world powers on Syria’s refugee crisis
How Can You Not Love Angelina Jolie?
The bastards are stoning our women
Slippery Barack Obama 976