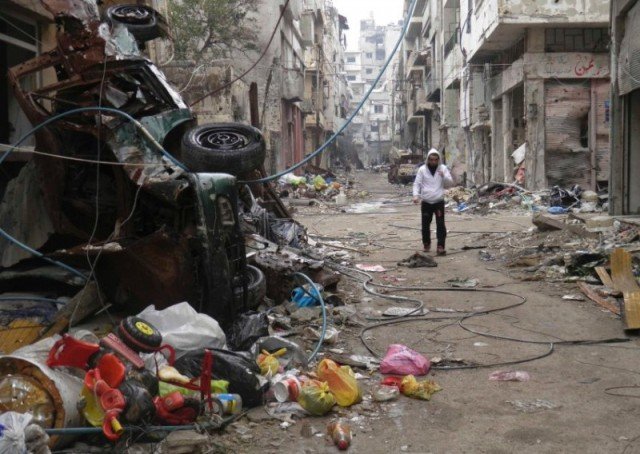 April 24, 2015 11:17 am 0
Who Are the Beneficiaries of Islamic Terror?
France Has an Islamist Problem that Diplomacy Cannot Resolve
Why Bashar Assad Won’t Fight ISIS

The dictator Baschar al-Assad has been quite generously giving much of his time for interviews by the western press. This follows a failed PR charm campaign by a U.S. New York-based company aimed at helping Assad break the isolation wall erected by so many countries tired of his terror and violence.

Here is a short list of the most visible interviews.

On April 21, France 2 interview in which Assad accused France of aiding “terrorists”. Assad’s terror lexicon interpret “terrorists” as anyone who is unwilling to subject himself/herself to his tyranny and terror. He also denied using chemical weapons against his own people and denied Iranian troops are in Syria. Zzzzzzzz.

On April 18, Swedish Expressen newspaper interviews Assad. He predicted al-Qaeda to be the future of Europe and the region. He also accused the Arab countries of financing and supporting “terrorists”. More of the same wild predictions and lies. Zzzzzzzz, once again.

On March 29, Charlie Rose interviews Assad for a 60-Minutes segment. Since Rose never asks any tough questions, Assad rolled him like dough. Assad told Rose he is open to dialogue with the U.S. (Did we not say Assad interviews communicate desperate signs?).

On February 13, New Statesman interviews Assad  (Also appeared in the New Republic). Unfortunately, the reporter falls for Assad’s ruse by calling the view from his palace ‘brightening’ as if to say it is Assad’s future. Jeremy Bowen did not see how desperate Assad was to convince the West it should combat ISIS by helping Assad remain in power.

On February 9, BBC Interviews Assad. Skirts responsibilities, more lecturing. He is above making mistakes, admits to nothing. He borrowed from Obama the word ‘fantasy’ to describe the aspirations of the Syrian people for freedom and human rights. By Allah, Mohammad, and the Koran, are you not tired of this man?

On January 27, Foreign Affairs interviews Assad. Interviewer Jonathan Tepperman had the good sense of calling Assad ‘delusional’. Everyone is sensing that these Assad interviews communicate desperate signs except Assad himself. These signs, however, are beginning to appear.

Why so many interviews in so little time? We believe Assad has reached a desperation point. We believe, because ISIS keeps getting stronger, that his family rule is on a short leach even by its most ardent supporters and allies.

Since East, West, Arab countries and Iran are all aligned against ISIS, an alternative to Assad at this moment in history would concentrate this alignment on defeating ISIS rather than burning Syria.

Assad, suddenly, has become the weakest link to a very complex problem many want to see resolved.

29 Hezbollah Fighters Killed in Battle for Arsal
The Sharia Terror
Is Assad Attempting to Recruit European Christians to Fight His War?
Radicalism 567