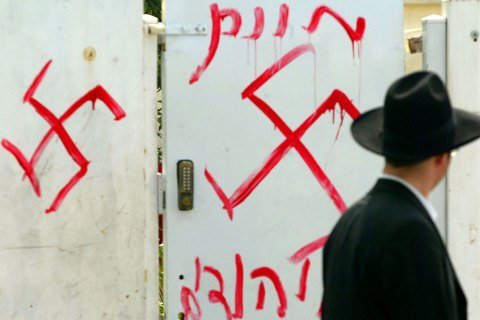 Anti-Semitism starts at the top

July 22, 2014 3:32 pm 0
The Junior Varsity Team in the White House
GOP giving Obama a free pass
Mr. President, should you not do more to protect the civilians?

The ugly flare-up of anti-Semitism across Europe and even in the US, something we did not see with such venom during the Israeli defensive campaign in 2006 against Hezbollah, has one explanation, if you ask me. It starts at the top where our own President?s far left ideology, men he befriended in college and beyond, and the zealot political machine that attended to his education have contributed to today?s own anti-Semitism sentiments.

Anti-Semitism is happening on US soil.

In Chicago, it has gotten so bad that schoolchildren have started an online game they named ?Jew Incinerators? and leaflets have been sighted on car windshields in a mostly Jewish neighborhood threatening extreme violence. Chicago is Barack Obama?s own hometown.

In Germany, Palestinian protestors and some of their racist supporters have been chanting ?Gas the Jews?, words that should bring shudders to every human spine. Chancellor Merkel needs to act by arresting, en masse, any demonstrators expressing the will to commit a crime. It is Kristallnacht, all over again, in Germany in 2014 under Merkel?s watch and she needs to act quickly.

Congratulations to President Hollande of France for banning any future pro-Palestinian demonstrations to protect the fabric of his nation.

Obama, meanwhile, may be yet attending another fundraiser.

Where is he to address the nation and the world live and on prime time to put an end to this madness?

The White House schedule today, July 22, 2014, is free of any commitment on the part of the President. Mr. Obama is having no official meetings or obligations of any kind.

How hard is it for him to appear on national TV to seek calm and to stop his own city from going haywire against its law abiding Jewish population?

There is something sinister about a President eager to take a podium to claim his support for Israel, but when it matters the most to his own Jewish supporters, he is AWOL.

I understand he may not need their votes anymore; however, this is about his legacy as Commander-in-Chief when his own hometown launches anti-Semitism in the US.

Shame on you Barack Obama if you do not show any leadership to unite the American people during these times of crisis and to appeal to our European allies to take the necessary measures to prosecute anti-Semitism to the fullest arm reach of the law.

Shame on you if you simply ignore it the way you ignored the US-Mexican border mess.

Except, Chicago is not Mexico or Honduras Mr. President. Chicago mirrors your conscience and its anti-Semitism will be connected to your legacy directly.