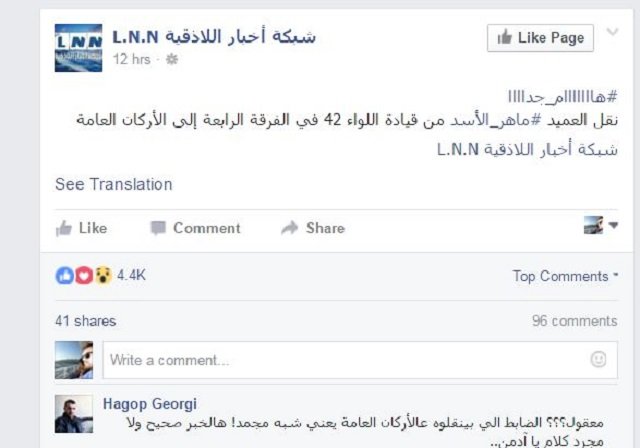 The Latakia News Network claimed that the Syrian president’s powerful brother has been transferred from his command of the 4th Armored Division.

A popular pro-regime Facebook page has claimed that Syrian President Bashar al-Assad’s powerful brother has been moved out of his de-facto command of the elite 4th Armored Division.

“Maher al-Assad has been transferred from the command of 4th Armored Division’s 42nd Brigade to the General Staff [of the Syrian Army],” the Latakia News Network—which has a following of over 200,000 people—alleged overnight Thursday.

Latakia News Network’s post was met with shock and incredulity by the regime-supporting fans of the Facebook page.

One commentator, Hagop Georgi, asked the administration of the outlet if their report was true “or just empty words?” He added that officers transferred to the Syrian army’s General Staff were “quasi-frozen,” implying their influence and status was checked.

Another Facebook user, Hussein N Ismail, voiced hope that the Latakia News Network confirmed their report so that followers of the outlet “lose trust in the news on your page.”

The administrators of the group responded to both posts with assurances that the report was correct, prompting Ismail to insist that he heard Maher al-Assad had not been transferred.

Yet another commentator warned the Latakia News Network that “you can’t hide the dog that has already barked,” in reference to their highly controversial claim.

The post by the Facebook news page adds further fuel to rumors swirling around Maher al-Assad. The pro-rebel Al-Etihad press claimed on March 16 that the Syrian president’s brother had been transferred to the General Staff’s Information Department, a move that would “deprive him of his influence as a field officer [commanding] one of the strangest strike units in the Syrian army.”

Although Maher al-Assad is technically only the commander of the brigade, he has de-facto leadership over the whole 15,000-man strong 4th Armored Division, which is one of the key units protecting the Syrian regime.

When Western Technology aids in Killing Innocent Syrians, It is Hard to Turn a Blind Eye
Saudi FM says to get rid of ISIS, Assad must go
You Want to Know What is Happening in Syria? Don’t Blink
Syria News 1098 Syrian Revolution 1350