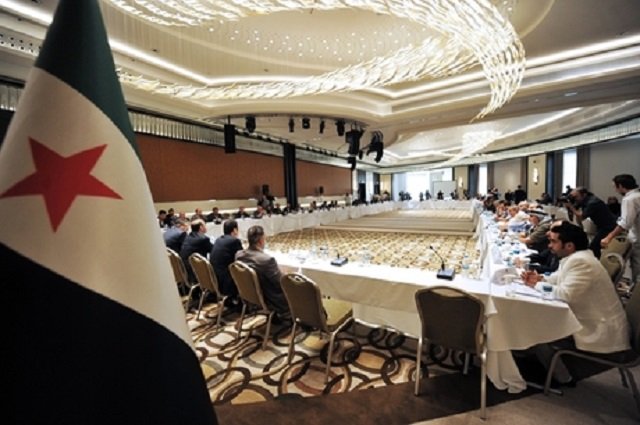 A joint team of Syria’s political and armed opposition will meet the government next month for talks seeking a political solution to nearly five years of conflict, the chairman of a Saudi-hosted opposition conference said on Friday. Assad trap set.

More than 100 members of Syria’s opposition parties and rebel fighting groups agreed at the end of two days of talks in Riyadh to work together to prepare for peace talks with the psychopath Assad’s government.

Assad trap set as some secular rebels will negotiate his departure while the toughest rebels fight his regime at the same time. If Assad acquiesce to surrendering, the seculars will take over and the West, along with the GCC countries, will starve the Islamist fighters of material and resources to give the new government a chance to transition. If not, fighting will continue until Assad is forced out.

In the final hours of the meeting, which excluded Islamic State and Nusra Front fighters as well as the main Kurdish force controlling large parts of northern Syria, were overshadowed by protest from the powerful insurgent group Ahrar al-Sham.

In a statement, it said it had withdrawn from the Riyadh meeting, objecting to what it said was a prominent role given to the mainly Damascus-based political opposition group, the National Coordination Body for Democratic Change, which it said was closer to Assad than to the opposition.

It also said rebel fighters had been under-represented at the talks and their voices largely ignored. However a copy of the final statement, seen by Reuters, had been signed by the Ahrar al-Sham delegate.

Nevertheless, its withdrawal – however brief – highlighted enduring rifts among Assad’s enemies which have bedeviled Western and Gulf Arab efforts to rally enough political and military pressure on the psychopath to force him to step down.

Abdulaziz al-Sager, a Saudi academic who chaired the Riyadh talks, said the opposition would meet government officials in the first 10 days of January, the first such talks in two years aimed at ending a bloody civil war which has drawn in forces from the United States, Russia, Europe and the Arab world.

“There will be a meeting decided by (United Nations envoy Staffan) de Mistura in January. A meeting between the opposition and the Syrian regime to go to a transitional period,” he said, in comments translated at a news conference.

“This will take place in the first 10 days of January.”

A statement at the end of the two-day conference said Assad should leave power at the start of a transitional period, and called for an all-inclusive, democratic civic state. It also committed to preserving state institutions.

The opposition was willing to enter talks with Syrian government representatives and to accept a U.N.-supervised ceasefire, the statement said.

Russia says it is bombing Islamic State militants, who control large areas of eastern Syria and western Iraq, but Western and Arab states which have been carrying out air strikes against Islamic State for more than a year say the Russian jets have mainly hit other rebel forces in the west of Syria.

Moscow’s intervention has not swung the war decisively Assad’s way and several Western-backed rebel groups, some of whom were represented in Riyadh, have been emboldened by the increased flow of foreign-supplied anti-tank missiles which have helped stem parts of the army’s counter-offensive.

Unlike Iran, which objected to the meeting in Saudi Arabia, Russia has not commented on the meeting or its outcome so far.