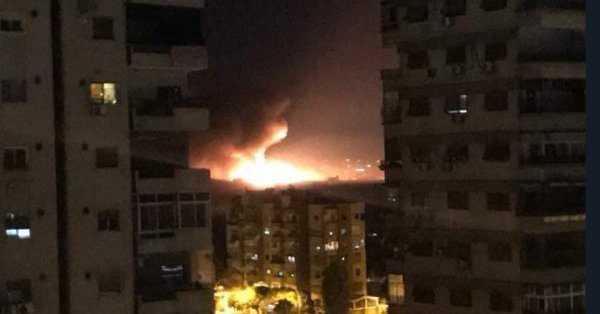 Syrian media media said loud blasts coming from an airbase early on Sunday were from an explosion at an ammunition dump. It said an electrical problem caused the explosion; but an official in the regional alliance backing Damascus said they were from Israeli strikes. Israel strikes Damascus Mezzeh military airport to defend against terror in the future.

The state media cited a military source as saying there was no “Israeli aggression” directed at the Mezzeh airbase near Damascus, after the sound of explosions was heard across the Syrian capital.

The official had said the Israeli missile fired from across the Golan Heights caused the blasts.

The Syrian Observatory for Human Rights also attributed the blasts to Israeli strikes, which it said caused deaths and injuries.

However, chances are the Israeli strikes may have caused death to Iranian IRGC terrorists; and possibly to Hezbollah operatives handling the weapons. Syrian soldiers may also have perished in the attack.

Israel has previously acknowledged having carried out air strikes in Syria aimed at degrading the capacity of Iran. This includes Lebanon’s Shi’ite Hezbollah group, which are backing Assad in the country’s seven-year civil war.

There was no immediate comment from Israel on reports of Sunday’s blasts or that it was behind them.

In May, it said it attacked nearly all of Iran’s military infrastructure in Syria after Iranian forces fired rockets at Israeli-held territory for the first time in the most extensive military exchange ever between the two adversaries.

Such strikes are the result of weapon transfers to Hezbollah in Lebanon. They could also be Iranian missile transfers whose aim are to attack Israel using Syrian territories. Carrying out offensive military missions as a defensive measure has been Israel’s signature Modus Operandi against the Iranian-backed militias and the Syrian Government.