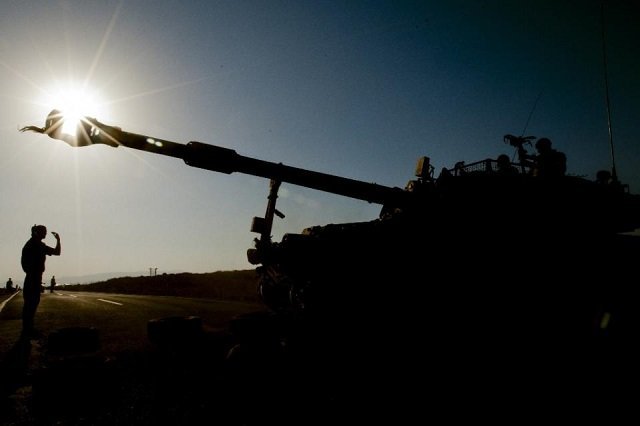 October 13, 2015 11:15 am 0
Justice or Islamism?
Watch The Three Musketeers of Terror Lose Their Marbles
Obama, Learn How Allies Defend Other Allies

The statement did not specify if the posts were hit.

Since the Syrian conflict erupted in 2011, the Golan has been tense, with an increasing number of mostly stray rockets and mortar rounds hitting the Israeli side, prompting the occasional armed response.

Israel had earlier said that two “stray” rockets hit the area of the Golan Heights it controls, without causing casualties or damage.

This is not the first time Israel targets Syrian army posts for either intentional or stray rockets that landed in the Golan Heights.

November 11, 2012: After mortar shells from Syria landed near an Israeli military outpost in the Golan Heights, Israel responded with by firing “warning shots” into Syria.

November 17, 2012: Syrian army fire hit an IDF patrol near the DMZ, damaging one jeep. Israeli artillery responded by shelling the Syrian army positions. Syrian soldiers were killed by the incident.

March 24, 2013: The IDF fired a guided missile at a Syrian army position after Israeli troops were shot at twice in the Golan Heights. No Israeli soldiers were hurt in the shooting.

May 21, 2013: There was an exchange of fire between Israeli forces and the Syrian army in the Golan Heights. An Israeli vehicle was hit by Syrian fire with the Israeli’s retaliating and destroying the source of the attack.

July 17, 2013: An Israeli army patrol came under fire and shot back at a group of unidentified suspects on the frontier.

August 17, 2013: Several Syrian mortar shells exploded in the Golan Heights and the IDF responded by firing a guided missile at a Syrian army post.

Since August of 2013, there have been over 20 other incidents between Israel and Syria. Each time Israel responded decisively against those elements firing into the Golan Heights.

They were likely “stray fire from internal fighting in Syria,” the army said.

Israel said it held Syria’s army responsible for the “blatant breach of Israeli sovereignty,” warning it would not tolerate rockets fired across the border, “intentional or not”.

Israel seized 1,200 square kilometers (460 square miles) of the plateau in the Six-Day War of 1967 and later annexed it in a move never recognized by the international community.