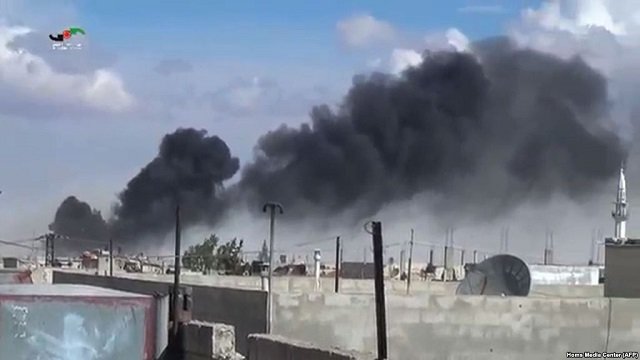 In spite of the Russian firepower raining on the Syrian opposition forces anchored around Hama, considered to be the most violent since the start of the Russian invasion of Syria in September, it is apparent that Russian airstrikes prove inconclusive in Hama. The regime forces have not been able to advance in their offensive against the two villages of Kafar Nabouda and Lahya.

The 25 regime forces killed include allied militiamen of Syria with non-Syrian nationalities. It is also probable that in addition to Iranians getting killed, that some Russian troops may have been killed.

In Russia, disclosure of troop killing in foreign wars is considered a state secret the government is not obligated to disclose publicly.

At the writing of this news item, the battles continue to rage around the two villages located in northern Hama and more casualties, on both sides, are taking place every hour.

It is obvious that the Syrian opposition is adjusting quickly to the Russian bombing campaigns even though the Russians are bombing hospitals and ambulances (See video below).

Dr. Ammar Martini has a simple question he would like answered: “Why are the Russians bombing my hospitals and ambulances?”

One of the cofounders of Orient Humanitarian Relief, a nonprofit that provides medical treatment and educational services in northern and central Syria, Martini was recounting to The Daily Beast how Russian airstrikes in the Idlib countryside Saturday destroyed a part of his emergency ambulance center. “They destroyed four or five of our vehicles,” he said. “These attacks were specifically targeting Orient.”

Below is a video Oubai Shahbandar, a former Pentagon officials turned Orient employee, shared with The Daily Beast, showing the charred vehicles. “If the Russians think ambulances are legitimate terrorist targets,” Shahbandar emailed, “imagine what they’re going to do to the rest of Syria.”

Russia has entered a quagmire called Syria. Its support of Assad has rallied and united many of the Syrian opposition factions.

As Russian airstrikes prove inconclusive in Hama, Syria will be Putin’s legacy tomb.

Who Wants Assad to Survive on His Watch?
The Cleverest Move Yet by Ambassador Robert Ford
Syria: Army Using New Type of Cluster Munition
Putin Terror 436