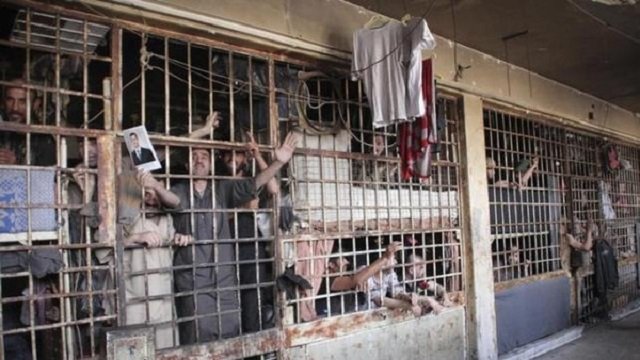 Another Assad Massacre at a Prison in Hama

August 15, 2015 6:12 am 0
How Assad Uses the Syrian Fleet?
Kofi Annan’s Peace Plan
Obama’s Doctrine: Extend a War to Defeat You Just to Force a Peace That Won’t Serve You

Hundreds of Syrian inmates at a main prison in the city of Hama rioted on Friday in a protest against jail conditions and harsh sentences, a monitor and rights activists said on Friday.

A leaked video purportedly from inside the jail showed scores of prisoners with their faces covered chatting “Allahu Akbar” (God is greater) with footage of a ward that had furniture and equipment ransacked and beds turned into barricades to sealed iron gates.

Activists on the ground said heavy gunfire shots were heard outside the prison in the city located 213 km north of the capital Damascus, after inmates, mostly held for joining protests against the state, took control of several major wards and ransacked prison quarters.

There may be heavy casualties among the prisoners considering the Assad regime past responses to prison riots. If so, this may be just another Assad massacre in the making against not criminals or Islamists, but peaceful opponents to his regime who protested peacefully in 2011.

Officials were not immediately available for comment and state media did not mention the incident, which are signals that another Assad massacre may have taken place.

The activists, which track violence in the country through a network of sources, said tear gas was used to quell the riots believed to be the worst bout of unrest since simmering tensions inside the prison this year.

In July, authorities broke into prison wards and took at least 25 prisoners to unknown destinations.

In mid-June, scores of inmates ended a hunger strike after getting promises by the authorities to address a catalog of complaints, including harsh sentences and widespread torture.

UN investigators have said there were suspected war criminals in Syrian military units and security agencies as well as in the insurgent groups fighting them in the country’s four-year long civil war.

International rights groups say thousands of detainees are held in Syrian government prisons without charges, many of whom are subjected to torture. Just another Assad massacre in the making.

The Syrian conflict began in 2011 with popular protests against the Assad regime and spiraled into civil war after a crackdown by security forces.

Another Assad Massacre at a Prison in Hama