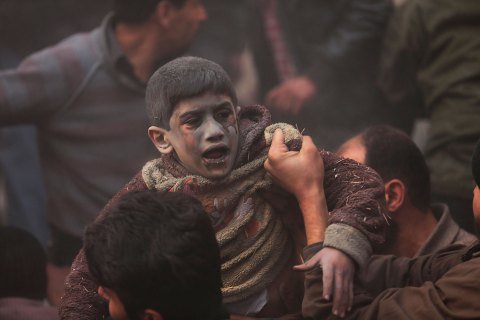 June 18, 2015 5:43 pm 0
Little Signs Assad Is Losing Even With Russian Help
One Should Learn from Samar Yazbek
With Different Agendas Comes Confusion

More than 70 countries have signed a letter demanding that Assad stop indiscriminate aerial attacks that have killed thousands of people and urging the U.N. Security Council to prevent the Syrian Air Force from future attacks including dropping barrel bombs.

The letter signed by over 70 countries, sent Thursday to Secretary-General Ban Ki-moon, the Security Council and General Assembly, expresses “outrage” at the continuing violence against civilians, especially by “the systematic use of barrel bombs.”

May was reportedly the deadliest month in the Syrian conflict, now in its fifth year, the letter said, and in recent weeks Syrian air force helicopters repeatedly bombarded heavily populated areas in and around Aleppo, the country’s largest city, leaving hundreds dead and dozens of others wounded.

The letter signed by over 70 countries said:

“Tragically, these barrel bomb attacks in Aleppo were the latest in a long line of the grisly and horrific use of aerial weapons, including barrel bombs, that have been launched by the Syrian Air Force on crowded urban areas, such as markets and bakery queues, hospitals and medical facilities, schools and places of worship, transportation hubs and residential buildings, throughout the course of the Syrian crisis leaving thousands dead”

Last year, the Security Council approved a resolution aimed at expanding the delivery of humanitarian aid, which demanded that all parties in Syria halt attacks against civilians and any indiscriminate use of weapons in populated areas, “including shelling and aerial bombardment, such as the use of barrel bombs.”

The 71 signatories to the letter urged the council to implement this provision of the resolution and prevent any future aerial bombardments. They also urged the council to ensure that humanitarian aid reaches everyone in need in Syria, which is not happening now because of the fighting and bureaucratic hurdles, mainly by the Syrian government.

The letter was drafted by the ambassadors of Belgium, Luxembourg and the Netherlands, and the signatories include the United States, Britain and France — but not Syria’s close allies Russia and China, the two other veto-wielding members of the Security Council.

While Russia and China didn’t block three resolutions last year aimed at speeding up delivery of humanitarian aid to millions of Syrians, they have vetoed several previous resolutions that even hinted at threatening sanctions against the Syrian government. And it appeared highly unlikely that Russia would approve any new measure trying to halt aerial attacks by the Syrian military.

70 countries may not be enough to convince Russia and China they are on the wrong side of history.

Too Little, Too Late, Too Insulting
Assad Will Pay for His Crimes With More Terror
Don’t hold your breath
Slippery Barack Obama 976