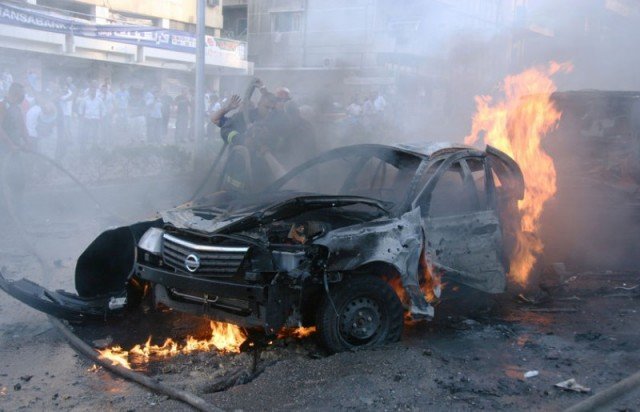 The Non-Punishable Terror of Car Bombs

July 16, 2010 10:37 pm 1
The Art of No Compromise
The Kurdish Cause vs. The Palestinian Cause
Assad is Encircling Israel with Missiles and Angry Mobs

The first country to excel at the rigging of car bombs was Syria. More car bombs have been manufactured by Assad in Syria than any other country (Competition is fierce with Iran).

When it comes to Syria, the non-punishable terror of car bombs goes on.

When Assad first unleashed his terror against U.S. troops and innocent Iraqis in the summer of 2003, the US, under Secretary of State Colin Powell, was timid in responding to the twin terrors of Assad and Iran. Inexplicably, this went on for years with no response from the US against the Assad or Iranian regimes and their factories of death inside their own territories.

When it comes to Syria and Iraq, the non-punishable terror of car bombs goes on.

Today, the car bomb is the weapon of choice to administer fear and maximum violence. It also has become a weapon of leverage because of its success against the US troops in Iraq.

Add to this fact the open-border policies between Syria and Venezuela as well as Iran and Venezuela and it was just a question of time before car bombs became part of the landscape on the US-Mexican borders. Today, it is the drug cartels, but tomorrow it will be al-Qaeda and Hezbollah fed by Assad and Ahmadinajead. Anyone who has any beef with the US will come to see the value of the Syrian and Iranian regimes know-how in car bombs.

Will they cross the borders into the US? We do not see anything stopping Assad and Ahmadinajead from conducting low-level war of terror on the US-Mexican borders and feeding any elements with interests to engage the US in a fleeting war of attrition and sheer terror. It may already be happening with the car bomb that exploded today, south of Texas, for the first time against Mexican government forces fighting the drug cartel.

The War on Terror must shift to the so far non-punishable terror and its methods as much as to those who use them. If you use car bombs, we will arrange for US drones to shadow you and estroy you if necessary, otherwise, it may not be long before such car bombs find their ways into US cities.

The Non-Punishable Terror of Car Bombs

The Thomas Affair: A Letter to Wayne State University
Assad is Encircling Israel with Missiles and Angry Mobs
Assad May Not Fall Before the Iranian Regime Does
Radicalism 567