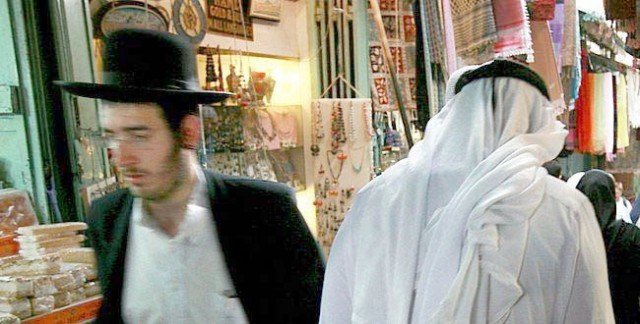 Every Muslim Should Become a Jew for One Day

The “Hate Jews” Index is off the chart. Where is the White House to stop it?

The history of the Jews is well known. But what is little known is how vitriolic global citizens have become towards the Jews.

Prior to the Gaza flotilla incident, there were sporadic articles one could read, which were politely poisonous but always expressive of the author’s sense of justice measured against some imaginary Jewish barometer.

But after the Gaza flotilla incident, I am shocked at what I have been reading. It is an outrage that this generation of global citizenry, born after their parents witnessed or fought against the horrors of WWII, could rule the Internet with such scathing and unforgivable hate.

Let me back my outrage with some real numbers.

In percentages, Jews are hated to the tune of 121 times more. That is 12,125% more than people hate Muslims if the ratio of number of Muslims as compared to Jews is taken into account as well as the “Hate Index” of each. An index that the unsuccessful, jealous of Jewish accomplishments, keep pushing up.

In spite of the terror we Muslims inflict daily on others and on each other, Jews are hated more than we could ever be.

Israel attacked Hamas only after Hamas launched thousands of rockets. But Hamas attacked the PLO in Gaza for no reason. Yet, the Jews are hated, and the Muslims, inflicting pain unto each other, escape accountability. Israel established a blockade to weaken its extremist nemesis, yet, the Jews are hated for defending their borders when we Muslims own 97% of the lands. Lands where Jews lived and roamed thousands of years ago and where remnants of Synagogues are found today in several Arab countries, including Syria, Yemen, Oman, Iraq, Egypt, Lebanon, and as far as Morocco.

We, Muslims, should be lucky the Jews only want Jerusalem.

This Gaza flotilla incident, prepared for in Syria and Iran, and executed by Erdogan, is nothing but a form of hazing conditioned by Assad and Ahmadinajead to join their fraternity of resistance. What all three wanted is to unearth the ugly face of discrimination and hate against the Jewish people to further their goals of terror.

Furthermore, we Muslims should designate one day a year where we all become Jews to understand what it feels like to be hated so much. Shame on us.

To Defeat Assad, We Have to Defeat Obama
The Kurdish Cause vs. The Palestinian Cause
Time to Counter Assad
Radicalism 567 Things That Matter 382