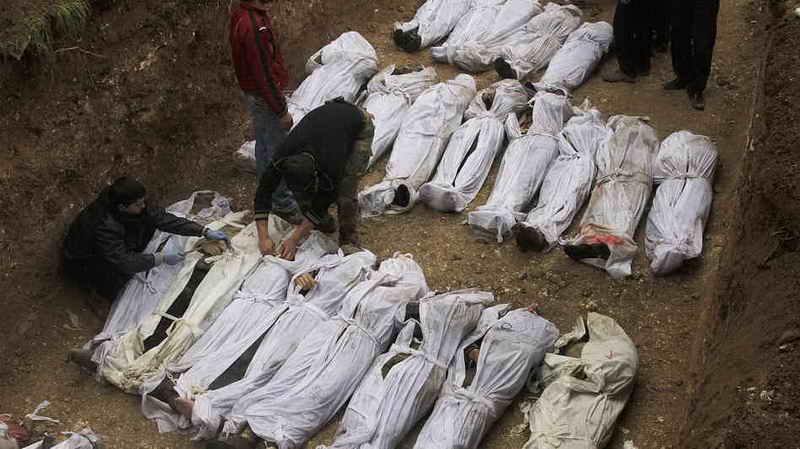 Deter the madness of Assad

August 22, 2013 10:16 am 0
Obama is mimicking the savagery of Assad
Bashar Assad may be weaker than he thinks
White House children running amok

Published in the Times of Israel (Deter the madness of Assad)

The world does not realize the madness of the Assad family; only the Soviet Union, now Russia, understands the gem it has discovered in the Assads.

Many countries around the world stock chemical and nuclear weapons to defend their people and borders from outside imminent threats in extreme cases, but the Assad regime stocks and uses chemical weapons to defend his own personal self even if it means massacring his own people. If there is a reason why countries fear WMD in the hands of mad regimes, we just witnessed yesterday that reason.

The toll from the 3:45am chemical attacks (when cameras are not rolling) could reach 1,300 people; amongst them are many children and women. This was a premeditated attack on civilian neighborhoods in the middle of the night to exact as many deaths as possible and to hide it as best as the regime can. The cruelty and savagery of the Assad regime knows no bounds.

In the US, there is no appetite to stop Assad whatsoever. Not even to deter him from carrying out another attack. In fact, Mr. Obama changed his tone on the “red line” threat by adding the word “systematic” in front of the word “attacks” during a meeting with King Abdullah of Jordan in April of this year. It means Mr. Obama may only act if Assad continues using chemical weapons. Therefore, the White House has deferred the matter to the defunct UN whose inspectors were present in Damascus during the attack, which is tantamount to Assad presenting the global community with his whole fist, not just the middle finger.

When the Federal Government in the US fails to protect localities or States from one danger or another, the local communities take matters in their own hands by arguing one legal framework or another depending on the matter. In fact, Washington is accustomed to being told to take a hike occasionally.

Maybe the severity and scope of Assad WMD attack, delivered by many missiles, is one of those moments where the localities should protect themselves from Assad’s madness by ignoring Washington. Maybe countries like Saudi Arabia should seriously consider ignoring the White House. No deterrent means the attacks will continue against civilians for now, but it could also mean, because the world is incapable of protecting anyone from Assad, that he is capable of gassing other people in the future. Any deterrent against the unpredictability of Assad is justified using the Responsibility to Protect legal framework or any other defense mechanism permitted under international law.

For those who speak of Egypt and Syria in the same sentence, here is an argument that may persuade you otherwise.

In Egypt, the army is trying to protect an ignorant public from tyranny of Islamism, but in Syria, the Assad army is killing its own people, which is feeding Islamism given its minority status. The whole Assad regime structure of a lawless, tyrannical rule by an Alawite minority, willing to gas the Sunni majority, is faulty and its sustainability will always come at a higher cost than the one to dismantle it. The world no longer lives in the mid-20th century and those who still believe Assad is the best alternative are dinosaurs out of touch with reality.

The local communities must deter Assad from using chemical weapons against any one for any reason. As former Defense Minister Shaul Mofaz said:

“These days, each of the Western heads of state acts based on his interests, however, they have a responsibility, as protectors of the free world, to act and take steps that will deter Assad from using weapons of mass destruction ‘but that’s not happening.”

Because Western heads of states do not wish to protect the region from Assad, the local communities should come together to fulfill their obligations to protect their own people and others in their community. Believing Assad is containable is madness.

Maybe few 3:45am missiles against some strategic Assad assets will be the deterrent he needs to curb his madness.

Not Iran or Assad are willing to engage in a larger conflict, a notion the local communities ignore at their own peril because they are showing as much weakness as the West is today.

Deter the madness of Assad