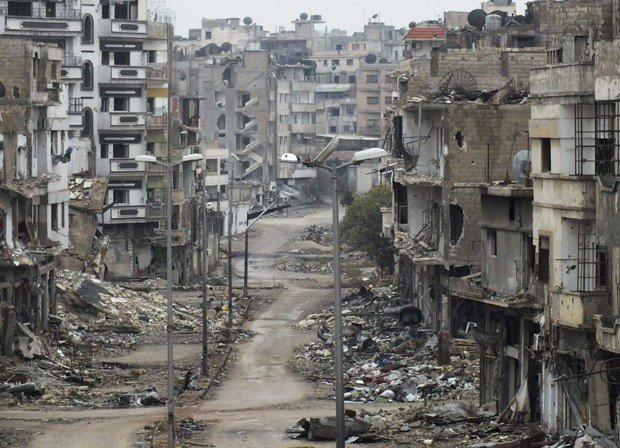 Analysis: Is Syria now a direct threat to the U.S.?

(Reuters) – Over the last two weeks, Obama administration officials have signaled – sometimes intentionally, sometimes not – that a worst-case scenario is emerging in Syria.

Peace talks are at a virtual standstill. An emboldened President Bashar al-Assad has missed two deadlines to turn over his deadliest chemical weapons. And radical extremists who have fought in Syria are carrying out attacks in Egypt and allegedly aspire to strike the United States as well.

Director of National Intelligence James R. Clapper told members of Congress last week that Jabhat al-Nusra, an al-Qaeda aligned group in Syria, “does have aspirations for attacks on the homeland.” American and Egyptian officials expressed alarm this week at signs that Egyptians who fought in Syria have returned home to mount an insurgency.

Critics of Obama administration policy in Syria argue that none of this should come as a surprise. For years, they have predicted that Assad and his Iranian and Russian backers would fight tenaciously; militants would flock to Syria; and the region would be destabilized by refugee flows, rising sectarianism and radicalized fighters returning home.

“A lot of things that the pro-interventionist crowd had argued two years ago have come to pass,” said Shadi Hamid, a Brookings Institution expert who called for military intervention in 2012. “The argument was that radicalism will rise.”

It is impossible to know whether a Libya-like intervention would have ended the conflict in Syria or exacerbated it. But citing recent statements from administration officials, Hamid argued that the current American approach is not working.

In his testimony last week, Clapper said that American intelligence agencies had picked up indications of “training complexes” within Syria “to train people to go back to their countries and conduct terrorist acts, so this is a huge concern.”

The retired Air Force general estimated that more than 7,000 foreigners from 50 countries – “many of them from Europe and the Mideast” – are fighting in Syria. He compared rebel-controlled parts of northern Syria to the Federally Administered Tribal Areas of Pakistan, or FATA, where foreign and local militants have sheltered since the fall of the Taliban in 2001.

“What’s going on there may be in some respects a new FATA,” Clapper said. “And the attraction of these foreign fighters is very, very worrisome.”

In the past, Clapper has been accused of exaggerating terrorist threats and making misleading statements about the scope of American surveillance activities. But Clapper is not the only senior official expressing concern about the rising militant presence in Syria.

At a private meeting with members of Congress at the Munich Security Conference last week, Secretary of State John Kerry said that “the al-Qaeda threat is real, it is getting out of hand,” Republican U.S. Senator Lindsey Graham later told reporters. “He openly talked about supporting arming the rebels. He openly talked about forming a coalition against al-Qaeda because it’s a direct threat.”

State Department officials said that Graham and other members of Congress who disclosed the private meeting distorted Kerry’s statements. They denied that Kerry raised arming the rebels or described the current policy as a failure.

Noah Bonsey, a Beirut-based Senior Analyst for the International Crisis Group, called Kerry’s reported statements “an acknowledgement of the facts.” On the rebel side of the conflict, al-Qaeda aligned militants have badly damaged the international reputation of the Syrian opposition. On the government side, Assad and his backers in Iran and Russia are increasingly confident.

“Geneva made abundantly clear that the regime is not prepared to compromise on anything at all, no matter how small,” Bonsey said in a telephone interview, referring to the peace talks. “They believe themselves to be winning and they perceive themselves as seeing no real pressure, certainly not from Iran and probably not from Russia.”

Steven A. Cook, a Mideast expert at the Council on Foreign Relations, agreed that Assad and the militants are both growing stronger. But he defended the administration’s decision to not intervene in what he called “someone else’s civil war.” Cook said the best way for Washington to respond to rising militancy in Syria was through regional allies, not direct American action.

“The question is how we go about countering them,” Cook said in an email. “I suspect that we are already doing things with friendly countries – Turkey, Jordan, others – to counter Nusra without a full-blown intervention in Syria.”

Bonsey said he too opposed direct American intervention but pointed out that for the last two years the United States has been trying unsuccessfully to work through regional allies. Despite scores of joint declarations, the United States, Qatar, Saudi Arabia and Turkey all continue to back different rebel groups, a practice that further atomizes an already fractured Syrian opposition.

“The first step remains working with the opposition’s regional allies,” he said. “Providing carrots and sticks that can encourage a move toward pragmatism which can make them a more effective force.”

Bonsey said this week’s announcement that Obama will visit Saudi Arabia in March could be a step toward a more unified effort. But Hamid said the Obama administration has little credibility after drawing “red lines” for Assad but failing to enforce them.

A central question – the central question – regarding Syria remains in dispute in Washington, experts said. Does Syria now represent a direct national security threat to the United States? Hamid, who called for intervention in the past, said it does.

“They’re saying now that fighters are going to be trained in Syria and come back to the U.S.,” he said. “We can’t pretend that it doesn’t have an impact on American national security interests.”

Cook and Bonsey agree the threat is rising but say the administration must first develop a coherent approach to Syria with its regional allies. Public opinion polls in the United States continue to show sweeping opposition to greater American involvement, including arming more moderate rebels.

Experts say only one scenario could change Washington’s stance: Syria-based militants somehow strike the American homeland. Until that occurs, no level of carnage in Syria, Egypt or the Middle East is likely to change Washington’s political calculus.