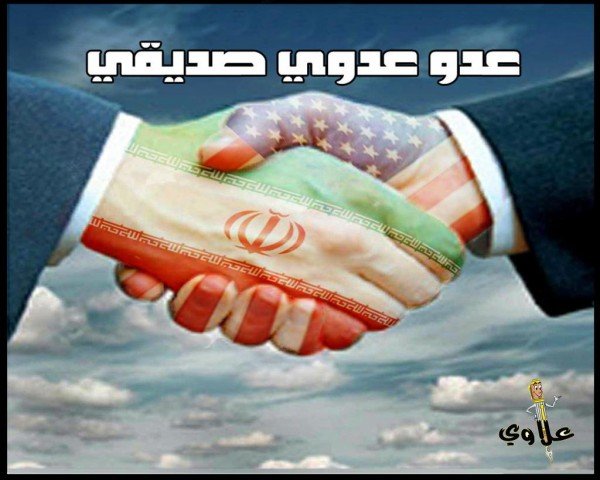 Is the US now a proxy of Iran?

Everyone approximating the age of a high school teen knows the Obama Administration is masterful at over spinning the good news and ignoring the bad ones. The craftiest administration ever when it comes to using words to tell a story. If Obama was married to the American people, he would be sleeping on the couch today if not outright exiled to atone and curb this insatiable appetite to mislead incessantly.

What, then, do you think is the real danger the United States of America is facing today as a result of the misguided foreign policy on Syria when CIA Director John Brennan warned us that the country has become AQ’s main base of operations?

The problem has been two-fold. Mr. Obama’s sense of who is the real enemy is and his inexperience in foreign affairs, especially when it comes to the cunning of Iran.

From the beginning, the Assad/Iran regimes have adopted the strategy of inviting al-Qaeda into Syria by turning the civil war sectarian. If you have any doubts about this fact, measure this against the backdrop of what US intelligence informed us on January 20, 2014 that Assad is aiding al-Qaeda directly; that story was followed on February 7, 2014 by the U.S. Treasury charging that Iran is enabling al-Qaeda in Syria.

When all eyes are on terror in Sochi, we really should be far more concerned about Washington. I believe that the testimonies of both Admiral Clapper, National Director of Intelligence, and CIA head John Brennan scratch the surface when it comes to the real and present danger this nation is about to realize.

Iran’s tactics in Syria in aiding and abetting al-Qaeda is not the exact replica of its successful campaign in Iraq, which was at the time centered on defeating the US and chasing our brave soldiers out of the region. This time around, Assad and Iran want to confuse and frighten the west, as part of a psychological warfare, into believing their nemesis is the real danger, not Syria or Iran. If they can scream “al-Qaeda, al-Qaeda” enough times using their propaganda mouthpieces in the west as well as those on the extreme far right who are as clueless as they come, the United States will have no choice but to turn its full attention, not to the women and children Assad is exterminating with impunity, not to the Chemical Weapons Iran and Russia are using as a decoy to extort Obama, but to the bloody al-Qaeda the Washington Institute for Near East admitted do not exceed 7,000 terrorists (As opposed to Hezbollah’s 60,000 terrorists).

This strategy has a caveat though. Iran has set a trap and the Obama Administration looks like it is falling in it. Assad and Iran aid al-Qaeda, not only to protect Assad from defeat (Plan A), but also to pull America into the war to fight al-Qaeda directly and on their behalf using their own enemies (Plan B). The testimonies we heard from Admiral Clapper and CIA Brennan are not driving the Obama Administration to modify its policy on Syria or break away from Iran, which is a clear indication Iran is leading Obama to come to Assad’s aid directly by helping defeat al-Qaeda in Syria, which is starting to happen when covert US operations encourage able-bodied Free Syrian Army fighters to turn their guns against AQ thus strengthening Assad.

If the US is seen as fighting to defeat al-Qaeda in Syria without a parallel policy to defeat Assad, it will be the end of Saudi Arabia and the Gulf States. In fact, the whole region will simply implode. Arab Sunnis will be joined by non-Arab Sunnis from the world over courtesy of some 5,000 Saudi-built Mosques and charities around the globe with a foot traffic of millions of Muslims on any given day. I know Obama has failed math as a kid, but did Stephen Walt and Denis McDonough failed it as well?

As a reminder, Mr. Obama refused to aid the Free Syrian Army (As he refused to aid the Green Movement in Iran), which resulted in al-Qaeda taking over northern Syria and western Iraq. He further struck a deal with Iran Mr. Obama’s own intelligence people are telling us now is aiding al-Qaeda in Syria. Considering these facts, Mr. Obama has set America up to be an Iranian proxy. Let this record be clear.

When will Obama hit the reset button on alienating US allies? I do not see this President admit to any mistakes or modify his behavior just because the US is under duress and a potent threat of domestic terror may be upon us.

Is the US now a proxy of Iran?