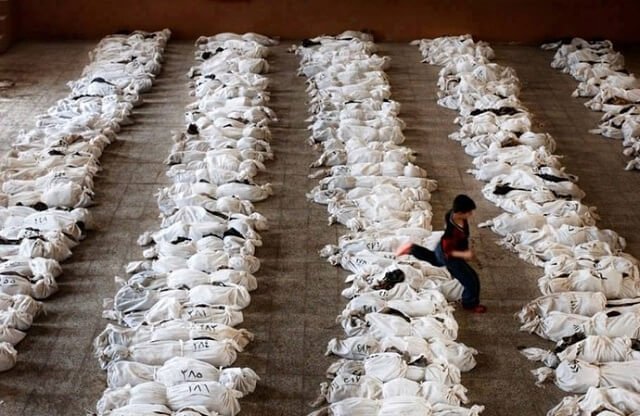 France Urges Force in Syria if Chemical Attacks Are Confirmed

As Western powers pressed the Syrian authorities to permit United Nations inspectors to examine the site of a claimed poison gas attack outside Damascus, France said on Thursday that outside powers should respond “with force” if the use of chemical weapons was confirmed. France urges force in Syria if chemical attacks are confirmed.

In an interview with BFM-TV television, however, Foreign Minister Laurent Fabius expressly ruled out the idea of ground forces intervening in Syria’s bloody civil war, now in its third year with over 100,000 fatalities.

“There would have to be reaction with force in Syria from the international community,” Mr. Fabius said, but added, “there is no question of sending troops on the ground.”

He gave no further details of what he had in mind. During the Libyan revolt that overthrew Col. Muammar el-Qaddafi in 2011, France, then led by former President Nicolas Sarkozy, joined with Britain in an air campaign that drew on strong support from the United States and other NATO allies.

The Obama administration has shown little appetite for comparable intervention in Syria. Indeed, America’s top military officer has told Congress that, while the Pentagon could forcefully intervene in Syria to tip the balance in the civil war, there were no moderate rebel groups ready to fill a power vacuum.

“Syria today is not about choosing between two sides but rather about choosing one among many sides,” wrote Gen. Martin E. Dempsey, the chairman of the Joint Chiefs of Staff. “It is my belief that the side we choose must be ready to promote their interests and ours when the balance shifts in their favor. Today, they are not.”

In Paris, Mr. Fabius’s remarks were published a day after diplomacy at the United Nations Security Council in New York produced a limited response to the claims by opposition forces on Wednesday. Their charges that scores if not hundreds of people had perished in the attack were supported by copious, if unverified, video images.

In an emergency session, the Security Council called for a prompt investigation of the allegations and a cease-fire in the conflict, but it took no further action. Mr. Fabius said that if the Security Council could not reach a decision, then action would have be take “in other ways,” which he did not identify.

The allegations of a gas attack were particularly jarring since a team sent by the United Nations is already in Damascus to investigate chemical strikes reportedly waged earlier in the war. The United States, the European Union and other world powers called for the investigators to visit the site of Wednesday’s attack, which news reports said took place only a 15-minutes drive from the inspectors”™ hotel.

The Security Council’s caution provoked a harsh outburst on Thursday from Turkey, a bitter foe of the psychopath Baschar al-Assad’s government, which shares a long and porous border with Syria and has been at the forefront of efforts to support the rebels trying to overthrow him.

Speaking to reporters in Berlin, Foreign Minister Ahmet Davutoglu of Turkey said Thursday: “All red lines have been crossed but still the U.N. Security Council has not even been able to take a decision. This is a responsibility for the sides who still set these red lines and for all of us.”

The notion of “red lines” was initially introduced last August by President Obama, who said the use of chemical weapons in Syria would radically alter American calculations about the war.

At the time, Mr. Obama declared that the use or deployment of chemical or biological weapons would

Speaking at a joint news conference with Mr. Davutoglu, Foreign Minister Guido Westerwelle of Germany urged the authorities to give United Nations inspectors immediate access to the area where the attack was reported. “We are very worried about the reports that poison gas has been used near Damascus. These reports are very serious and if they are confirmed would be outrageous,” he said.

France Urges Force in Syria if Chemical Attacks Are Confirmed