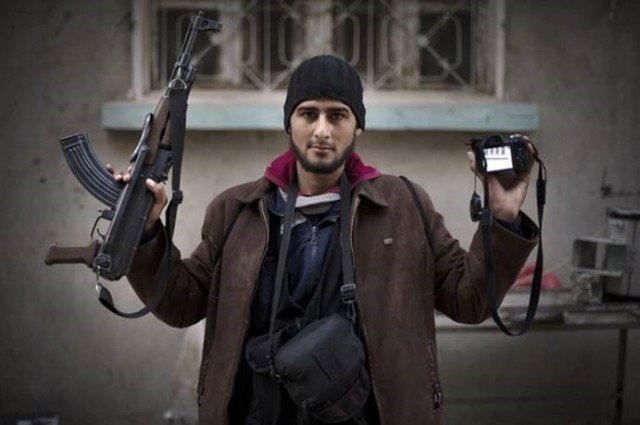 Syria, the most videotaped war in human history

The Syrian civil war is, by a mile, the most photographed and videotaped war in human history. It erupted at a time when every mobile phone had a camera and many Syrians had mobile phones. My guess, there are tens of thousands of videos and photos to show all stages of the war. This trove of information in the good, the bad, and the ugly will be, for a long time, the source of all Sunni extremist recruitment.

Regardless whether Obama strikes IS in Syria or not, its roots will be the most durable if you compare them to other terrorist organizations.

Take al-Qaeda for example, its growth, and its recruitment was based on a singular message that America is the Great Satan and we must defeat its symbols at home and beyond. Whether it was the bombing of the USS Cole, or the US Embassies in Africa, or 9/11, al-Qaeda targeted the US.

However, with the Islamic State, the message is far more potent because it has multi-layered parts all speaking to the fears of the Arab masses based on the sectarianism we witnessed in the Syrian war. It says,

“The Great Satan is here at home and his name is Baschar al-Assad. He terrorized Sunni women and children. It is our duty to revenge their deaths.”

“If we do not attack Assad and his ilk, one day he and Iran will come and kill your family where you live.”

“America is evil and we hold America responsible for not helping the Syrian people to stop the atrocities of Assad when they are helping Iraqi Shia under the same condition but in reverse. Do you have any doubt that this is a conspiracy by the West to massacre Sunnis?”

Compare that to the stale AQ message. There is no need to sugarcoat the danger of the message of IS.

If IS was able to recruit 100 Americans, 2000-3000 Europeans, and thousands of Sunnis to fight and die on the battlefield, just imagine what it can do in the Arab Sunni world once it goes underground. It will, one day, threaten stable US allies like Jordan and Saudi Arabia from within. AQ, at the height of its power, could only recruit a handful of Americans, two of whom terrorized Boston and Fort Hood, and one failed sneaking a bomb in his shoes.

Whether the Islamic State leadership survives or not, as long as Assad lives, Sunni extremism will continue to fester. Assad has become a rallying symbol for Sunni fanatics under which terror will cultivate and grow. This is why the Islamic State is targeting the minorities by emulating everything Assad has done to Syrian civilians; be it starvation, tortures, or executions. If they had access to fighter jets, they would bomb the minorities with barrel and cluster bombs. If they had access to WMD, they would not hesitate a second to use them as well.

From an Arab street perspective prone to theories of conspiracies under every stone, that street does not understand the motives of Obama as he strikes IS in Iraq. They will only see the surface, that Obama is siding with the Shia to massacre the Sunnis. This is how simple the Arab street and how prone it is to manipulation.

So, when you read some article claiming the Islamic State has limited growth potential, as I read in some US-produced intelligence reports, take it with a grain of salt. It takes an Arab and a Sunni to understand the effect of the war Assad waged against the civilians in Syria. No CIA analyst or advisor to the President will fully grasp the emotional intangible factor in his or her cold numbers and predictions.

Had he helped defeat Assad early on or even attempted to assist on a humanitarian basis by airlifting supplies to the many cities Assad starved to death, We would not be writing this article, nor would Obama be back in Iraq bombing terrorists. IS must be stopped, no doubt about it, but if Assad goes free, no one will be able to stop their terror.

We never wished to be more wrong than when we wrote this Blog.

Our generation will not see the Arab countries mature and join the civilized world. If it is not Assad, it is al-Qaeda; if it is not Hezbollah, it is Hamas; if it is not the IRGC, it is ISIS. Arabs are just tired of terrorism.

We hope our children will fare better.

Syria, the most videotaped war in human history