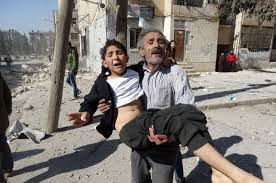 If the United States largest industry is healthcare, Assad terror is the largest industry in Syria. Terror is the center hub of a nation hijacked by a sick Assad family to force the extraction of concessions. It aims to blackmail rich Gulf countries, and to impose a curtain of fear upon the region the family manipulates to its advantage. Americans still clueless about Assad terror.

When the Syrian Revolution metastasized into a full-blown civil war, it blew all the pistons out of the Assad’s engine of terror. Instead of terrorizing surrounding countries, the Assad terror, even with his extreme tactics of spreading fear inside Syria, suddenly faced the prospect of losing it all. Public fear in Syria became a rare commodity in a nation that finally buckled under the weight of excessive tyranny.

A FAMILY WHOSE GOALS IOS TO BLACKMAIL COUNTRIES

During the last 42 months of civil war, Arab countries racing to weaken and dismantle the regime in Syria were not motivated, mostly, by the ethnic cleansing we see today. It had everything to do with their sigh of relief over the possibilities this infected family is about to perish thus relieving them from incessant extortion and threats. Even when Assad’s extreme atrocities to cleanse Syria from the Sunnis began in earnest, Arab countries were still looking at the Syrian civil war from the perspective of self-preservation from the Assad terror first and humanitarianism second.

The fact that most Americans do not grasp the nature of the Assad terror and by extension, its master in the Khomeini/Khamenei regimes is quite disturbing.

If you survey Americans about who instigated, armed, and funded al-Qaeda in Iraq, very few would tell you it was the Assad terror and the Khamenei terror. Their action resulted in the killing of over 4,000 American troops.

If you survey Americans about who is arming and assisting Hamas to attack Israel, very few would tell you it was the Assad terror and the Khamenei terror behind this attack on a US ally.

Furthermore, if you ask Americans about who created, funded, and protected ISIS to grow into the monster we see before us, very few would tell you it was the Assad and the Khamenei terror.

If you ask Americans who killed all those Christian leaders in Lebanon during and after Syria’s occupation by the Assad family, very few would tell you it was the Assad and the Khamenei terror. With extra help from Hezbollah.

Assad’s support for terror goes back to the seventies when it funded Palestinian groups and even non-Arabs like Carlos the Jackal, Carlos attacked an OPEC meeting Austria was hosting in 1975. That was the Assad terror extorting money from the Gulf countries and Libya. How many everyday Americans would know this? I could count them on my two hands.

Iran’s terror began under Khomeini in 1979 almost two weeks after the US admitted the ailing Shah for cancer treatment. Khomeini ordered his followers to hold hostage the American diplomats serving in the US Embassy in Tehran. It lasted for 444 days. Iran’s terror against the US and its allies in the region has not abated since.

Today, Khamenei’s terror pursues the goals of cleansing/domination of Arab Sunnis, terrorizing Israel, and expelling the US from the region.

Americans are as ignorant about Syria and Iran as they are about naming Mexico City the capital of New Mexico.

If it was not for Michael Ledeen’s Blog, Americans would even be much more ignorant.

WHO IS TO BLAME FOR AMERICAN IGNORANCE?

Who is to blame for this blunder that keeps coming back to haunt the US, and keeps our presidents from taking decisive action against both terror nations?

Primarily, it is the job of the US State Department to educate the public about the Assad terror. Yes, it does publish annual country reports about democracy and human rights; but who really reads them but human rights organizations and dissidents.

If the US really wanted to protect its interests from the Assad terror and that of Iran, the US State Department would relentlessly inform, whistle train stop tours campaign style, about the reality of those two state-sponsors of terror. Then when the right moment comes when we have a worthy president, and it will come, America would be standing by its president to pluck their terror from its roots.

SICO is a deserving idea as long as the president hires the right people beholden to no ideology, only to serve US interests.

We vote for Oliver North to head such an office.