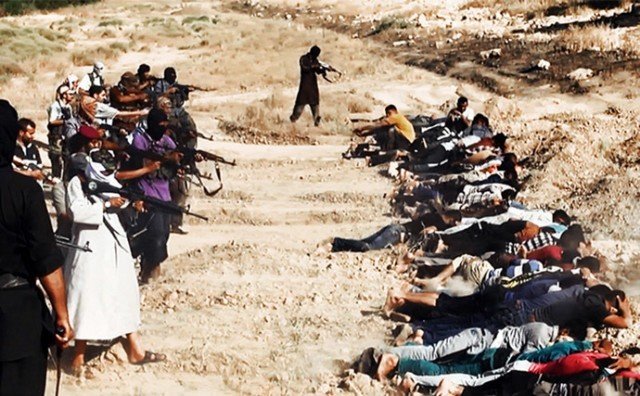 The Crisis of ISIS

Do you remember how you felt on 9/11 when those fully fueled civilian airplanes struck both towers in Manhattan and the Pentagon? Do you remember the anger, the frustration, and the will to fight back at our enemies? This is exactly how the Jihadists of ISIS feel about the atrocities Assad committed. As 9/11 brought terror home, so did Assad.

After 9/11, young men and women lined up to volunteer to fight the Taliban and al-Qaeda in Afghanistan. Sunni Muslims, from 50 countries, are volunteering today to battle the Assad regime ISIS sees responsible for the atrocities committed against Sunni civilians. When we told the Obama Administration it had to interfere in Syria or we will face terror, we knew our stuff.

With the US striking ISIS in Iraq, ISIS may be able to recruit even more because it reinforces the sense, amongst Arab Sunnis, because the US did not interfere in Syria, that this is the making of a western conspiracy to exterminate Sunnis in favor of the Shia. The men battling side by side with ISIS do not see it as saving the minorities or protecting US interests; they see it as the West standing by the Shia of the region against the Sunnis.

Al-Qaeda’s message was not as potent as ISIS message is today. It said we must attack America, a faraway land, which only resonated as much as asking a resident of South Bend to go fight in Syria. It is a stagnant message if you compare it with the message of ISIS. This is why al-Qaeda was able to recruit a handful of Americans and ISIS was able to recruit 100 Americans and 2000-3000 Europeans. Recruiting as far away as the US should not surprise us.

This is the danger of ISIS. Its fighters are as motivated as we were on 9/11, and after Assad, they will attempt to devour every stable country in the region. ISIS is Arab Spring gone Frankenstein on us.

Saudi Arabia arrested 88 men yesterday and I am willing to bet ISIS is at work using the social media to foment havoc and terror.

When terror struck us home, we deployed whatever resources were necessary to hit as hard as we can at the Taliban in Afghanistan. ISIS is also deploying whatever is necessary to hit back at the minorities in Iraq and Syria. Somehow, they think the Christian communities are behind the terror in Syria when, in fact, the Christians of the Levant are more frightened than ever before of the ISIS boogeyman. They have every damn right to be frightened.

It is important if President Obama decides to strike ISIS to balance the US policy by either striking the Assad forces to show impartiality or, at least, airlifting humanitarian aid for Aleppo or any other besieged city. This will cushion the blow most Sunnis in the region would feel as opposed to the rage if the US looked like it is siding with one sect of Islam against another.

Make no mistake about it, the US was able to win its war against the Taliban and al-Qaeda; however, the US will not be able to suppress a growing anger amongst the 300 million Sunni Arabs in the region who see terror striking them at home and who see America taking sides. How would you feel if the Chinese or the Russians bombed US cities to prevent us from striking al-Qaeda?

For once, President Obama is right in weighing all options instead of rushing to Syria and falling in another much deadlier trap.

The policy must balance between striking terror, be it state sponsor or not, and demonstrating US impartiality. Airlifting aid to Aleppo will show that much needed impartiality to shut down the ISIS recruiting pipeline. We must make it far more difficult for ISIS to recruit as easily as it had so far.

Islam in the Arab world, today, hovers around the middle of the middle ages in terms of social, political, and economic order. Every suicide bomber that unleashes terror is a clear demonstration of how long and arduous the road ahead is that would lead us to a Renaissance of sort. Before the enlightenment of Renaissance comes acceptance of our weaknesses and our deficiencies; however, Islam is still in the enraged state with no clear indication of how long this lethal period will last.

In the meanwhile, American turrets should be armed, drones fueled, and satellites spying 24/7 because the crisis of ISIS is far from over.

If Putin Thinks Syria Will Be Less Painful Than Afghanistan
Do You Speak Pushtu?
Commemorating the 10th Anniversary of 9/11: Let us Never Forget
Radicalism 567