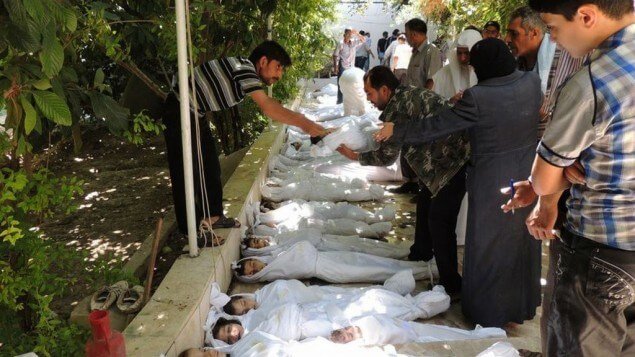 On Wednesday, rebel groups in Syria claimed that as many as 1,300 people were killed in a chemical attack in the eastern suburbs of the capital Damascus. The reports were accompanied by a string of grisly photos and videos depicting scores of dead civilians, including children.

The reports “raise the possibility that an extremely grievous crime has been committed by the Syrian regime against its citizens,” Netanyahu said.

“This act adds to the roster of crimes committed by the Syrian regime, with the aid of Iran and Hezbollah, against the Syrian people,” he said.

Netanyahu added that it was “absurd that UN investigators, who are in Damascus right now to investigate the possibility that chemical weapons have been used, are being prevented by the Syrian regime from reaching the affected areas.”

He placed the blame for the continued fighting on Iran.

“Syria has become Iran’s testing ground, and Iran is closely watching whether and how the world responds to the atrocities committed there by its client state Syria and its proxy Hezbollah against innocent civilians in Syria,” he said.

Earlier Thursday, several opposition MKs expressed outrage at the reported carnage in Syria and called on the government to speak out on the issue.

“In a place where babies and children are massacred with gas, the State of Israel must make its position known,” said MK Nachman Shai (Labor), a former IDF spokesman.

“We’re not just another people or another state in the world. We have a moral stance and a recent history that produced the slogan ‘Never again,’” Shai said in a statement Thursday. “The slogan refers to every place and time where a people is murdered and children are massacred. It’s time to make our voices heard clearly. If not, this silence will pursue us for many years to come.”

Fellow Labor MK Isaac Herzog called the images from Syria “horrifying” and said he believed the Syrian situation would “only continue to deteriorate.”

Herzog noted in a statement that he had once expressed support for an American-led “international force that would replace Assad by force. It would have prevented terrible humanitarian suffering, and Syria could have begun a democratic era.”

But that possibility is now gone, Herzog said: “With the passage of years and the entry of jihadist forces into the arena, the situation has become irreparably complicated.”

He nevertheless insisted that Israel speak out on the killing taking place just a handful of kilometers from its borders.

“Israel has a moral voice, and it must make it heard. On a practical level, it must focus on humanitarian aid to Syria’s citizens, and continue to be vigilant in the face of regional developments,” he said.

MK Itzik Shmuli was more laconic, posting to Facebook a photo of children purportedly killed in the Damascus attack. “In wars for justice, children also die,” he wrote under the photograph. The phrase comes from a poem by the Israeli poet Tzruya Lahav titled “Flower,” about a little girl killed in war.

Russia Reportedly Orders U.S. Planes Out of Syria as Its Parliament Approves Sending Troops
Living with the mental scars of torture
Explaining why ISIL attracts Muslims from the US and the EU
Assad Genocide 429