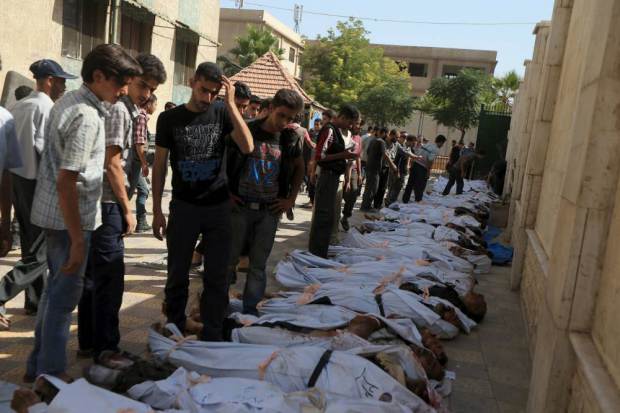 December 13, 2015 9:22 am 0
What Will Happen to Syria’s Weapons?
Did Obama Order Benghazi Stand Down?
Naive community organizer meets dangerous Assad

At least 28 civilians were killed on Sunday when Assad missiles rained down on Douma, a besieged Syrian rebel stronghold east of Damascus. Some of the missiles targeted an elementary school.

The rockets and missiles were also accompanied by air strikes, which targeted Douma and the nearby town of Saqba, but it was unclear whether they were carried out by Syrian or Russian warplanes.

“One of the air strikes on Douma hit near a school, killing the school’s principal.”

On Sunday, a young girl was killed and three people were wounded in rebel mortar fire on Damascus, according to the national news agency SANA.

Last month, regime forces and rebel groups tried to reach a 15-day ceasefire in Eastern Ghouta, but the talks failed and violence has resumed.

A local activist group in Douma shared photographs on Facebook of crumbling buildings and bloodied children lying in a makeshift clinic.