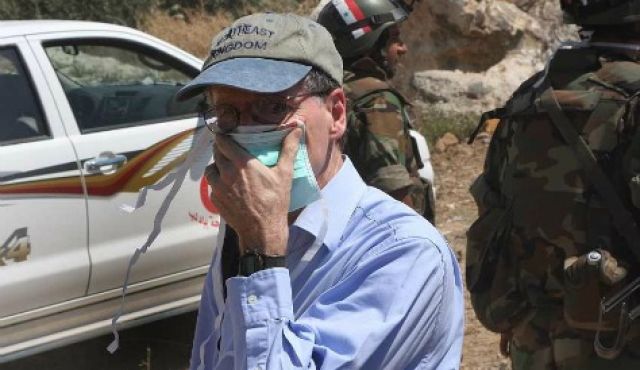 The Cleverest Move Yet by Ambassador Robert Ford

July 8, 2011 10:12 am 0
What a great man Barack Obama is
Surprising Way Some Syrians Are Protecting Themselves From Snipers
Assad Kills 60 Civilians in Aleppo

The US Ambassador to Syria, Robert Ford, visited Hama today to highlight his solidarity with the demonstrators. The videos trickling show at least 500,000 Syrians are out demonstrating in the city of 800,000 residents. This, to my recollection, is the first time a US Ambassador joins a demonstration for freedom in an Arab country and possibly anywhere around the world. This most cleverest move also silenced the critics calling for his recall and I must admit I was one of those voices.

This is by far one of the cleverest move yet undertaken by Ambassador Ford and the US State Department. With the void the Syrian people feel having to battle the regime and its inclination for extreme violence, the Arab League whose silence is embarrassing (The AL is doomed after this), and most western nations lending lip service to our plight, the visit of Ambassador Ford will fill that void and all of the Syrian people will be looking for the US to save their country and help them plant the seeds of freedom, democracy, and human rights.

But it also could backfire if the US State Department and the Obama administration either reinforce the “reformist” demands on Assad instead of calling for his removal or stand by the MB openly and conclusively. Syrians must have a choice today and the US cannot but support theirs by equally supporting all the different peaceful groups combined.

How important Ambassador’s Ford visit to Hama is? The people of Aleppo have already issued an invitation for Ford to visit their city. I suspect many more will be forthcoming as well. The most important will be the one issued by Damascus, the seat of Assad’s power. The cleverest move yet by the U.S. State Department.

So far, we have not seen the Obama Administration demonstrate any clever moves except to meet and ponder on Syria. The meetings are endless and the results all point to a big disaster looming on the horizon if no action is taken toa rm the liberal-minded Free Syrian Army.

The Cleverest Move Yet by Ambassador Robert Ford