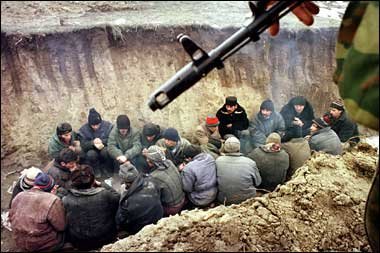 June 18, 2015 5:27 pm 0
So Much for Assad’s Iron Fist
The War Arrives Latakia
Assad Had Nervous Breakdown, Iran Stopped Him From Quitting

Russia said it has made some suggestions on how blame could be determined for chemical weapons attacks in war-torn Syria and will discuss the issue on Friday with the United States, which is pushing for the creation of a team of U.N. investigators.

In other words, will Putin fool Obama again by either assigning blame on ISIS or some other Sunni extremists (Putin hates Muslim Sunnis) instead of the real culprit in Assad and his thugs? Or will Putin suggest another charade on how to disarm Assad who will find another way for another day to gas more civilians?

As long as Assad feels Putin is protecting him from prosecutorial accountability, he will continue to find ways to mass kill civilians. The problem has been and will always be Assad and the criminals in his regime, yet no one has the courage to eradicate this cancer once and for all.

The United States gave Russia a draft United Nations Security Council resolution to study six weeks ago that would establish an accountability procedure in an attempt to pave the way for council action against those responsible.

“If this is to be done, definitely there will need to be a resolution, but we’re wondering what would be the most straightforward and rational way to deal with this subject,” Russian U.N. Ambassador Vitaly Churkin told Reuters on Thursday. Will Putin fool Obama again?

“We have some ideas, we shared them with our American colleagues, they are thinking them over and tomorrow we’re going to have another discussion,” he said. “I don’t want to go into details but I think there is a way to deal with this subject.”

Syria agreed to destroy its chemical weapons in 2013, but the Organization for the Prohibition of Chemical Weapons has since found chlorine gas has been “systematically and repeatedly” used as a weapon. The group does not have a mandate to lay blame.

Chlorine is not prohibited, but its use as a weapon is prohibited under the 1997 Chemical Weapons Convention, which Syria joined in 2013. If inhaled, chlorine gas turns to hydrochloric acid in the lungs and can kill by burning lungs and drowning victims in the resulting bodily fluids.

“We envision a (accountability) mechanism that would fall under the U.N., but that would involve some cooperation with the Organization for the Prohibition of Chemical Weapons,” a U.S. official said on Thursday.

Cooperation with OPCW could mean here: Work with us to blame someone else.

Let us hope not because this will be the ultimate act of cowardice by Barack Obama. Will Putin fool Obama again?

Russia is a Syrian ally and has protected Assad from council action during the four-year civil war.

Some 300,000 people have been killed and an estimated 7.6 million are internally displaced. Another 4 million Syrians have fled the country.