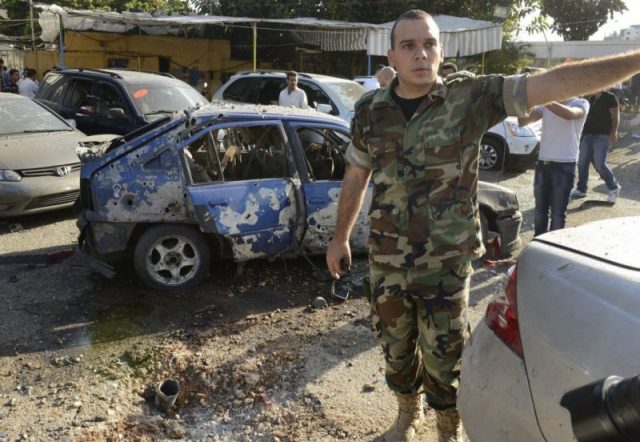 May 26, 2013 8:53 am 0
West is Slowly Breaking Iranian Grip
Senior al Qaeda leaders reportedly released from custody in Iran
Finally, Someone is Pointing Fingers at Obama for Syria’s Tragedy

It was the first attack to apparently target Hezbollah’s stronghold in the south of the Lebanese capital since the outbreak of the two-year conflict in neighboring Syria, which has sharply heightened Lebanon’s own sectarian tensions.

One rocket landed in a car sales yard next to a busy road junction in the Chiah neighborhood and the other hit an apartment several hundred meters away, wounding five people, residents said.

A Lebanese security source said three rocket launchers were found, one of which had misfired or failed to launch, in the hills to the southeast of the Lebanese capital, about 5 miles from the area where the two rockets landed.

The rocket strikes came hours after Hezbollah leader Hassan Nasrallah, a supporter of Baschar al-Assad in neighboring Syria’s civil war, said his fighters were committed to the conflict whatever the cost.

Nasrallah said in a televised speech on Saturday evening.

“We will continue to the end of the road. We accept this responsibility and will accept all sacrifices and expected consequences of this position. We will be the ones who bring victory”.

Syria’s two-year uprising has polarized Lebanon, with Sunni Muslims supporting the rebellion against Assad and Shi’ite Hezbollah and its allies standing by Assad. The Lebanese city of Tripoli has seen frequent explosions of violence between majority Sunnis and its small Alawite community.

French Foreign Minister Laurent Fabius condemned the violence in Lebanon. “The war in Syria must not become the war in Lebanon,” he told reporters in Abu Dhabi on Sunday.

Until recently, Nasrallah insisted that Hezbollah had not sent guerrillas to fight alongside Assad’s forces, but in his speech on Saturday he said it had been fighting in Syria for several months to defend Lebanon from radical Islamist groups he said were now driving Syria’s rebellion.

Hezbollah forces and Assad’s troops launched a fierce assault last week aimed at driving Syrian rebels out of Qusair, a strategic town close to the Lebanese border which rebels have used as a supply route for weapons coming into the country.

But they are unable to prevent the flow into Syria of Sunni Muslim gunmen who support the rebels and Hezbollah fighters who support Assad, and have struggled to absorb nearly half a million refugees coming the other way to escape the fighting.