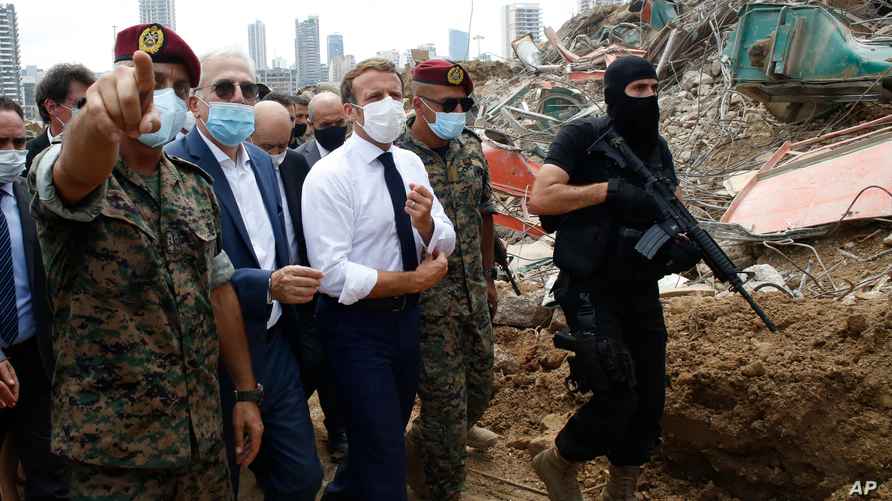 French President Emmanuel Macron on Thursday promised aid to Lebanon. He reassured angry citizens reeling from a blast that killed 145 people that no aid will come without its strings attached for Lebanon’s leaders to enact reforms and end rife corruption. Any conditional aid to Lebanon must Seek Ouster of Michel Aoun who plays two roles: 1) A Hezbollah puppet and, 2) The traffic chief of Lebanon’s corruption racket directing illicit funds to politicians looting the country.

Speaking at a news conference at the end of a dramatic visit to Beirut, Macron called for an international inquiry into the devastating explosion that generated a seismic shock felt across the region, saying it was an urgent signal to carry out anti-corruption reforms demanded by a furious population. Macron witnessed first-hand the anger of the Lebanese people when they pleaded his help to oust the rotten politicians in Lebanon.

Chief among them are the top honchos Hassan Nasrallah, Walid Jumblatt, Nabih Berri, Michel Aoun, and Riad Salame who heads the Central Bank. Ministerial-level corrupt politicians include Jamal Jarrah, and former telecom ministers Nicolas Sehnaoui and Boutros Harb among many. Ministers earn their positions for promising kickbacks to the top honchos.

If reforms are not carried out, Lebanon will continue to sink. What is also needed here is political change. This explosion should be the start of a new era — French President Emmanuel Macron, August 6, 2020.

MACRON TO HEZBOLLAH: LEBANON BEFORE IRAN

Dozens are still missing after Tuesday’s explosion at the port that injured 5,000 people and left up to 250,000 without habitable homes. The blast hammered a nation already staggering from economic meltdown and a surge in coronavirus cases.

A security source said the death toll had reached 145, and officials said the figure was likely to rise.

Macron said he proposed to the Lebanese authorities a roadmap of urgent reforms to unlock billions of dollars in funds from the international community. He promised to return to Lebanon in September to follow up.

If reforms are not carried out, Lebanon will continue to sink. What is also needed here is political change. This explosion should be the start of a new era.

Macron said France will organize an international aid conference for Lebanon, and he promised “transparent governance” so the aid goes to the people, NGOs and relief groups and not to the ruling elite which has been accused of corruption and mismanagement.

He told reporters that an audit was needed on the Lebanese central bank, among other urgent changes. He said that the World Bank and United Nations would play a role in any Lebanese reforms. Talks with the IMF on a rescue package have stalled over Hezbollah’s reluctance to enact serious reforms.

During his visit Macron met all Lebanese political factions. Including Hezbollah, which is an agent of Iran. He urged the terror group to implement reforms and think of Lebanon’s interests rather than Iran’s.

“I guarantee you, this (reconstruction) aid will not go to corrupt hands. I see the emotion on your face, the sadness, the pain. This is why I’m here” — French President Emmanuel Macron, August 6, 2020

Earlier, wearing a black tie in mourning, Macron toured the blast site and Beirut’s shattered streets where angry crowds demanded an end to a “regime” of Lebanese politicians they blame for dragging Lebanon into disaster.

Macron told the wave of crowds that greeted him:

I guarantee you, this (reconstruction) aid will not go to corrupt hands. I see the emotion on your face, the sadness, the pain. This is why I’m here.

At the French ambassador’s residence, where a French general declared the creation of the state of Lebanon exactly 100 years ago, Macron said it was no longer up to France to tell Lebanese leaders what to do, but that he could apply “pressure”.

In an interview with French news channel BFM, he said if France did not play its part, “that is of a power that believes in multilateralism and believes in the interests of the Lebanese people, other powers may interfere whether it be Iran, Saudi Arabia or Turkey.”

They [Lebanese politicians] will scapegoat somebody to defer responsibility — Rabee Azar, construction worker

The government’s failure to tackle a runaway budget, mounting debt and endemic corruption has prompted Western donors to demand reform. Gulf Arab states who once helped have balked at bailing out a nation they say is under Iranian control. Thanks to Hezbollah.

At the port that the giant mushroom cloud and fireball destroyed, families sought news of the missing. While expressing tortuous anger at the authorities for storing huge quantities of highly explosive ammonium nitrate. Since 2014 and unsafely.

There was a small but violent protest near an entrance to parliament in central Beirut. Riot police deployed after some demonstrators burned objects and hurled rocks at security forces.

The government has placed some port officials under house arrest. State news agency NNA said 16 people were taken into custody. A judicial source and local media said Beirut Port General Manager Hassan Koraytem was among them. The central bank said it had decided to freeze the accounts of Koraytem and the head of Lebanese customs along with five others.

Rabee Azar, a 33-year-old construction worker, speaking near the smashed remains of the port’s grain silo, surrounded by other mangled masonry and flattened buildings, said:

They will scapegoat somebody to defer responsibility.

Our leaders are crooks and liars. I don’t believe any investigation they will do — Jean Abi Hanna, retired port worker

CONDITIONAL AID TO LEBANON MUST SEEK OUSTER OF MICHEL AOUN

With banks in crisis, a collapsing currency and one of the world’s biggest debt burdens, Economy Minister Raoul Nehme said Lebanon had “very limited” resources to deal with the disaster. By some estimates it may have cost the nation up to $15 billion.

International offers of medical and other immediate aid have poured in, as officials have said hospitals, some heavily damaged in the blast, do not have enough beds and equipment.

Many Lebanese, who have lost jobs and watched savings evaporate in the financial crisis, say the blast is symptomatic of political cronyism and rampant graft among the ruling elite.

Jean Abi Hanna, 80, a retired port worker the blast damaged his home and injured his daughter and granddaughter, said:

Our leaders are crooks and liars. I don’t believe any investigation they will do.

An official source familiar with preliminary investigations blamed “inaction and negligence” for the blast.

People who felt the explosive force said they had witnessed nothing comparable in years of conflict and upheaval in Beirut. The country experienced a full-fledged civil war between 1975-1990.

The blast rendered the port inoperable. It remains Lebanon’s main route for imports needed to feed a nation of more than 6 million people.