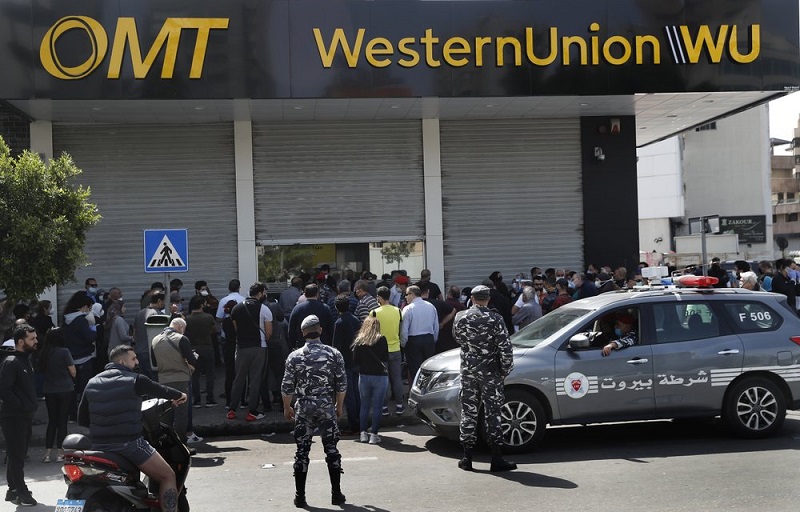 Lebanon’s currency continued its downward spiral against the dollar. It reached a new low amid financial turmoil in the crisis-hit country, which is also compounded by a coronavirus outbreak. Notice how Lebanese bad luck always coincides with lousy political choices.

Ever since Hezbollah has decided to play king maker in Lebanon through sheer violence and death, Lebanon has found itself in a deep financial crisis. It reminds us of the times when Lebanon played easy host to Palestinian terrorists. Similarly, it ended with the Palestinians attempting to take over the country as well; but the Lebanese Maronites fighting under the banner of the Kataeb blocked their treachery. Inevitably, that period spawned the wounds of Lebanon’s civil war, which lasted 17 years.

The same is happening today. Hezbollah, working for a foreign country, takes over Lebanon and suddenly it falls apart. Bad luck always strikes Lebanon when the Lebanese people embrace bad political choices. Hezbollah succeeded where the Palestinians failed; correspondingly, Lebanon is also faring as bad, if not worse, than the period during its civil war.

Did Lebanon expect that the United States is going to sit idle when thugs in turbans and beards threaten the existence of Israel?

Add to the equation the coronavirus impact and it is not hard to see the suffering of the Lebanese people. All the result of letting Hezbollah take over the country, and its politicians, like Michel Aoun, working with terrorists for power and personal wealth. TFS calls Lebanon’s president Michel Aoun “the clown” for a good reason.

The currency crash came as hundreds of Lebanese – most of them wearing face masks but few keeping a safe distance – crowded outside money transfer offices Thursday, the last day that authorities allowed dollars to be dispensed to customers following new Central Bank rules.

The rules, detailed in a bank circular released this week, require banks to convert cash withdrawals from foreign currency bank accounts to the local currency, the Lebanese pound, at market rates determined daily by the bank. It wasn’t clear if the new regulations would impact foreign transfers as well.

Wake-up Lebanon. It’s all about Hezbollah and its king maker status. When Hezbollah disappears, so will Lebanon’s troubles.

THE FORMULA FOR RECOVERY IS SIMPLE

Lebanon must come to grip with its political reality. The Lebanese who are empowering Hezbollah, an entity that takes orders from a foreign country, are to blame for Lebanon’s woes today. Did Lebanon expect that the United States is going to sit idle when thugs in turbans and beards threaten the existence of Israel?

The formula for recovery is simple. The Lebanese must fight for their independence from terrorists hijacking their political system. It is not hard to create a financial crisis when the country has paved the way, through corruption and stupidity, for a superpower to move few chess pieces. Lebanon, though, is still in a slumber. And so far, Hezbollah still maintains an iron fist. It obstinately rejected any IMF package to save the country because it would loosen its grip.

The Lebanese spilled blood and tears during the civil war to save their country from the Palestinians. And unless they replicate by spilling blood and tears to get rid of Hezbollah, the country’s slide into economic oblivion will continue. Eventually, the people will take up arms and fight for their bread and butter.

The United States turns a blind eye to the excesses of the Lebanese politicians in order to use it against them one day. Just as Hezbollah achieves total control, the U.S. throws the ball behind the rushing defense to wreck havoc on the country. Lebanon is caught in no man’s land because of its corruption, which made it real easy to spark a financial crisis.

It is sad to watch Lebanon suffer. But realpolitik kick in when your geography happens to be next to a small country the sole superpower in the world has committed to protecting at all costs.

Wake-up Lebanon. It’s all about Hezbollah and its king maker status. When Hezbollah disappears, so will Lebanon’s troubles.