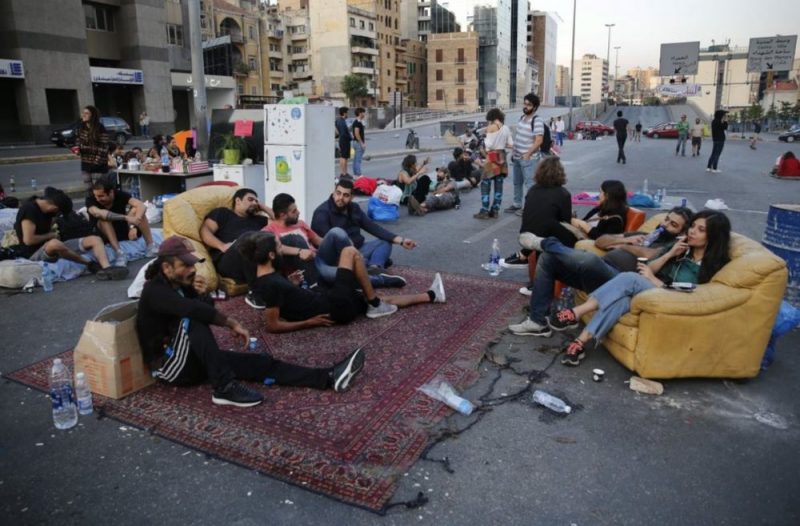 How to Protest and Enjoy Life in Lebanon

October 28, 2019 8:34 am 0
Hezbollah is Threatening Lebanese Journalists for Covering Protesters
“This Is Lebanon, Not Iran” Protesters Are Chanting
The People of Lebanon Versus Hezbollah

On a main thoroughfare in Beirut on Monday, Lebanese protesters set up a living room with an area rug, a couch and a refrigerator. On another, they held a morning yoga class. And on a third road, a band with an accordion player sang one of the newest slogans of Lebanon’s anti-government protests. This is the Lebanese guide on how to protest and enjoy life in Lebanon.

In another, a middle-aged couple played Backgammon while blocking a highway.

“Hela, hela, hela ho, the road is closed, sweetie,” the song went — a reflection of how the protesters have grown more creative as they have blocked roads as part of massive anti-government demonstrations underway for the last 12 days.

The protests are directed at the political elites who have dominated the country since its 1975-1990 war. Many Lebanese accuse of corruption and economic mismanagement.

In many locations, demonstrators have sat or lain in the streets in a form of civil disobedience. They forced the security forces to drag them away by their arms and legs. In others, they have blocked routes with overturned dumpsters and burned tires.

Lebanese soldiers forcibly removed protesters from a highway linking the southern city of Sidon to the capital, Beirut; they briefly detained around a dozen of them. The Lebanese soldiers did not use any weapons and there were no reports of serious injuries from the confrontation.

The protests have paralyzed the country but have been largely peaceful, with security forces exercising restraint. There have been few reports of arrests or serious injuries since the demonstrations began, and security forces have stood by during mass rallies held in public squares.

On Sunday, thousands of protesters formed a human chain stretching along major highways in and around Beirut.

Schools, banks and most businesses remained closed Monday. This raised concerns that many Lebanese would not be able to receive their salaries at the end of the month. There are also fears of a run on the banks that could further deplete the country’s limited supply of foreign currency. Without foreign currency, Lebanon suffers from is its ability to import wheat, fuel and medicine.

How to Protest and Enjoy Life in Lebanon