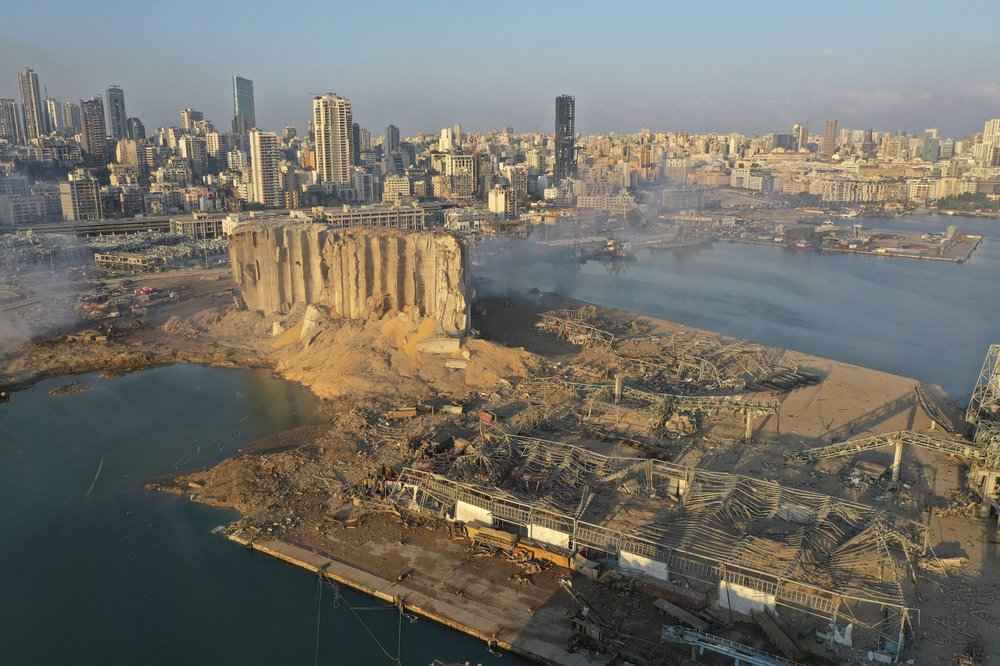 August 5, 2020 1:34 pm 0
Michel Aoun The Little Assad of Lebanon
The Hezbollah Wrecking Ball Has Brought Lebanon to its Knees
Hammering Hezbollah for its Loyalty to Iran. Not Lebanon.

The last time an ammonium nitrate explosion caused so much damage was in 1947 in an incident dubbed the Texas City Disaster. It is a very rare event because of how difficult it is, according to experts, to ignite ammonium nitrate. In light of this reality and the probable gains to Hezbollah, professional western investigators must examine the site for conclusive and scientific evidence. As far as we are concerned, there are four persuasive reasons the Beirut blast benefits Hezbollah and Assad of Syria indirectly.

We believe that if the U.S. and Europe request permission to investigate the port site, Hezbollah would object vehemently. Just as Assad objected to international examination of the sites where he dropped his deadly sarin gas.

The last thing Hezbollah wants is the west looking into another blast. Like the Rafik Hariri one. And should the west find evidence it was Hezbollah that ignited the ammonium, it will be the end of Hezbollah in Lebanon. The terror group would not be able to survive the anger of the local population; nor the international condemnation.

The reasons we are expressing all represent valid arguments that one must take into account. This is not conspiratorial in nature because all four reasons make perfect sense.

First on the list is the aid Lebanon is in dire need for. Second, we believe, is that the blast buries the U.N. tribunal verdict with regard to Hezbollah assassinating ex-prime minister Rafik al-Hariri. Thirdly, Lebanon would now need a new trade route and none exists but through Syria. Last is that attention is now focused on rescuing Lebanon, instead of probing government corruption, and specifically Hezbollah’s.

Let us look at each reason logically.

With Lebanon suffering from an economic meltdown, the country needs desperately a fresh injection of hard foreign currency to stabilize the economy. The problem is that Hezbollah has refused to abide by some of the IMF conditions it requires to reform the government. For weeks there has been a stalemate of sort that made matters much worse, and yesterday’s blast may soften the west to ignore its own rules.

We should treat the timeliness of the blast not as an accident, but as a sinister plot Hezbollah devised to turn the tables on the west. Do not be at all surprised if, in the next week or so, Europe begins to consider injecting some capital into the Lebanese economy. The blast might just be the catalyst Hezbollah created for Europe to rescue Lebanon.

Fifteen years after Hezbollah dispatched a truck bomb to kill Lebanon’s former Sunni leader Rafik al-Hariri in Beirut, a U.N.-backed court has been trying, in absentia, four Hezbollah suspects. The court will be delivering its final verdict on Friday, which the blast might bury under a heap of news. Such would play into Hezbollah’s hand and fully to its benefit.

The port is no longer operational, which means Lebanon must go through Syria to receive the goods it needs

BUST THE US SANCTIONS AGAINST ASSAD

Because Lebanon is sea-locked and bordering only two other nations, trade routes is now an issue. The port is no longer operational, which means Lebanon must go through Syria to receive the goods it needs. Since Syria is under very tough sanctions, the Beirut blast may have busted those tough U.S. sanctions. Not only does it benefit Hezbollah, but Damascus and Tehran as well.

Since Lebanon has no trade relations with Israel, Syria, for the Lebanese Government, is the only route it can use for its trade.

In effect, the blast has derailed, and possibly buried for good, any investigation into Hezbollah’s corruption

Besides the three reasons described above, with this blast Hezbollah just dodged a huge bullet. One that was going to investigate Hezbollah for pilfering billions from the Lebanese treasury for its own brutal purposes. Such is not possible while the Lebanese people suffer unimaginable miseries due to the explosion.

In effect, the blast has derailed, and possibly buried for good, any investigation into Hezbollah’s corruption.