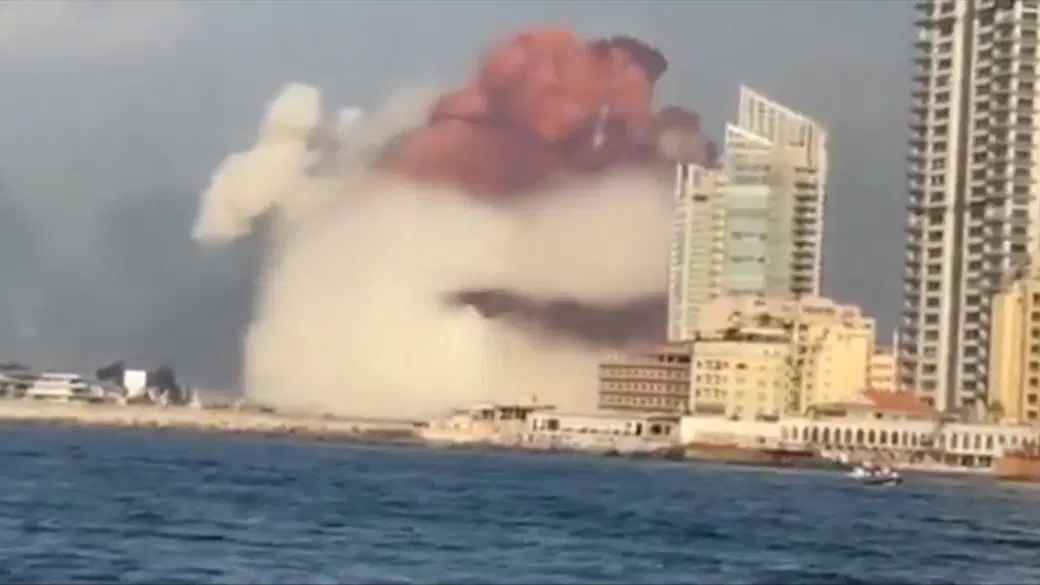 August 4, 2020 7:42 pm 0
The Hariri Verdict Projects UN Complicity
Keep the Pressure on Hezbollah
Past US Success Dooms This Hezbollah Terrorist

A huge blast in port warehouses near central Beirut storing highly explosive material killed 78 people and injured nearly 4,000. It sent shockwaves that shattered windows, smashed masonry and shook the ground across the Lebanese capital. One theory taking shape in the halls of power: Did Hezbollah cause blast to force international aid and to bury U.N. verdict on Rafik Hariri coming in less than three days?

Officials said they expected the death toll to rise further after Tuesday’s blast as emergency workers dug through rubble to rescue people and remove the dead. It was the most powerful explosion in years to hit Beirut, which is already reeling from an economic crisis and a surge in coronavirus infections.

President Michel Aoun said that 2,750 tonnes of ammonium nitrate had been stored for six years at the port without safety measures and said it was “unacceptable”. Fertilizers, or nitrate oxide, generally produce explosions with red plumes.

What we are witnessing is a huge catastrophe. There are victims and casualties everywhere.

President Trump offered sympathy and assistance to the people of Lebanon after an explosion that left dozens dead and thousands injured on Tuesday, referring to the incident as a “terrible attack.” Lebanese officials have not called the explosion an attack.

“Let me begin by sending America’s deepest sympathies to the people of Lebanon, where reports indicate that many, many people were killed, hundreds more were very badly wounded in a large explosion in Beirut,” Trump said at a press briefing Tuesday evening. ”Our prayers go out to all the victims and their families. The United States ready to assist Lebanon.”

In Merkel’s case, the Chancellor said:

“Our thoughts are with those who have lost love ones. We wish the wounded a speedy recovery. We will offer Lebanon our help.”

The explosion occurred three days before a U.N.-backed court is due to deliver a verdict in the trial of four suspects from the Shi’ite Muslim group Hezbollah over a 2005 bombing which killed former Prime Minister Rafik al-Hariri and 21 others.

Hezbollah and Assad killed Hariri with a huge truck bomb on the same waterfront, about 2 km (about one mile) from the port.

Reuters wrote a story about the upcoming Rafik Hariri verdict in which the British News Agency said:

The defendants, members of the powerful Iran-backed group, have been tried in absentia on charges of planning and arranging the 2005 bombing which killed the former prime minister who spearheaded Lebanon’s reconstruction after its long civil war.

With one incident, Hezbollah forced the international community to provide aid. At the same time, it also buried the United Nations verdict due this coming Friday.

SO MANY VICTIMS, SO FEW RESOURCES

Meanwhile, a security source said authorities are transporting victims for treatment outside the city because Beirut hospitals were packed with wounded. They called on ambulances from the north and south of the country and the Bekaa valley to the east to help.

The blast was so big that some residents in the city, where memories of heavy shelling during the 1975 to 1990 civil war live on, thought an earthquake had struck. Dazed, weeping and wounded people walked through streets searching for relatives.

Others sought their missing loved ones in the overflowing hospitals. One medic said one single emergency department admitted 200 to 300 people. “I’ve never seen this. It was horrible,” the medic, who gave her name as Rouba, told Reuters.

Prime Minister Hassan Diab told the nation there would be accountability for the deadly blast at the “dangerous warehouse”.

“Those responsible will pay the price,” he said in a televised address to the nation. He added that details would be made public.

Hezbollah installed Diab to his position.

The U.S. embassy in Beirut warned residents in the city about reports of toxic gases released by the blast. It urged people to stay indoors and wear masks if available.

Footage of the explosion shared by residents on social media showed a column of smoke rising from the port followed by an enormous blast. It started with a huge white cloud and ended becoming a long vertical red plume of smoke. The explosion threw backwards those filming the incident from high buildings 2 km (one mile) from the port.

DID HEZBOLLAH CAUSE BLAST TO FORCE INTERNATIONAL AID?

Officials did not say what caused the initial blaze that set off the blast. A security source and local media said some welding work started the blast.

The government said it as still struggling to establish the full scale of the disaster. “There are many people missing. People are asking the emergency department about their loved ones and it is difficult to search at night because there is no electricity,” Health Minister Hamad Hasan told Reuters.

He said the massive blast killed 78 people and injured nearly 4,000. “We are facing a real catastrophe and need time to assess the extent of damages.”

The prime minister called for a day of mourning on Wednesday.

Reuters and CNN contributed to this article.