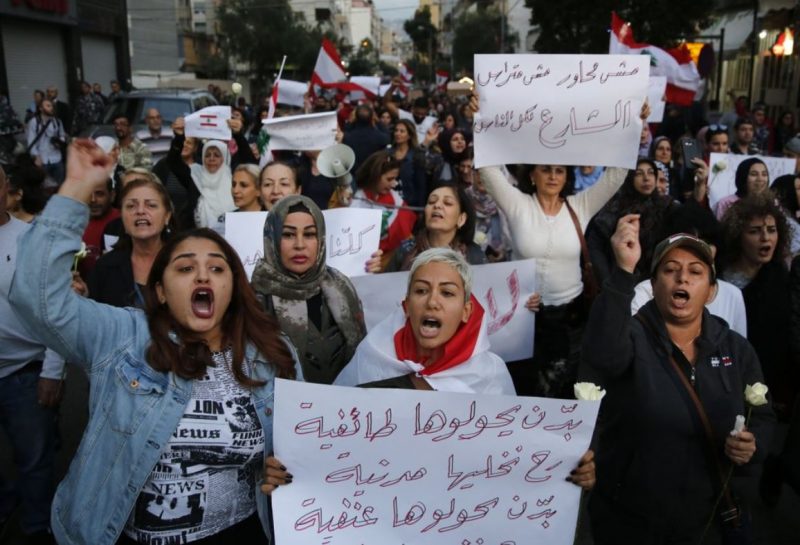 Will Clown Aoun Pivot Away From Hezbollah?

November 28, 2019 7:00 am 0
Michel Aoun The Little Assad of Lebanon
US Treasury Announced New Sanctions Against Lebanese Politicians
Most Corrupt Man in Lebanon Says Country is a Sinking Ship

Hundreds of Lebanese women marched across a former front line in the Lebanese capital Wednesday carrying white roses and Lebanese flags to denounce overnight clashes between Hezbollah thugs and the Maronite Christian community. The clashes injured dozens. Will clown Aoun pivot away from Hezbollah?

Does the once anti-Hezbollah politician realize he might become the incompetent president that brought Lebanon to its knees? The president that started a new civil war?

Amid a political impasse after 40 days of protests, sectarian and political rivalries are awakening, with scuffles breaking out daily, including in areas that were deadly front lines during the country’s 1975-90 conflict.

The tiny Mediterranean country is also reeling under the worst financial crisis in decades with unprecedented capital controls. Tempers are flaring by a well armed population. There are real concerns Lebanon could be sliding toward a prolonged period of instability. Even a new civil war, which might please Hezbollah looking to flex its terrorist muscles.

We are standing before two dangers that are racing with each other, the danger of financial collapse and the danger of security collapse. It is an unprecedented situation.

The overnight clashes — mostly fistfights and stone throwing between supporters and opponents of Lebanese clown President Michel Aoun — erupted in cities and towns across the country, injuring dozens of people. The Lebanese army detained 16 people for their involvement.

The clown Aoun has yet to hold consultations with parliamentary blocs on choosing a new prime minister after the government resigned a month ago. Aoun takes his order directly from Hezbollah.

The most recent violence first began Sunday night after supporters of the two main Shiite groups, Hezbollah and the Amal Movement of Parliament the corrupt Speaker Nabih Berri, attacked protesters on Beirut’s Ring Road. During the civil war, that thoroughfare had connected predominantly Muslim neighborhoods in the city’s west with Christian areas in the east.

Intense clashes took place Tuesday night between people in the Shiite suburb of Chiyah and the adjacent Christian area of Ein Rummaneh. Both sides hurled stones at each others. Hezbollah thugs stood face-to-face with the well-armed supporters of the right-wing Christian Lebanese Forces. A shooting in Ein Rummaneh in April 1975 triggered the 15-year civil war that killed nearly 150,000 people.

Also on Tuesday night, supporters and opponents of Aoun engaged in fistfights and stone throwing in the northern city of Tripoli. The clashes injured 24 people. Seven of them had to be hospitalized.

In the mountain town of Bikfaya, scuffles and stone throwing between Aoun’s supporters and supporters of the right-wing Christian Lebanese Phalange Party caused 10 injuries. The violence broke out after a convoy of dozens of vehicles carrying Aoun supporters drove into the historically Phalange stronghold.

On Thursday, about 300 women marched on the former front line between Ein Rummaneh and Chiyah after meeting each other in the middle and exchanging white roses. Some held banners that read: “All one nation” and “All one pain.”

“No to civil war!” they shouted.

But in the absence of a government and any political solution, analysts say more turmoil and instability is inevitable.

I expect more chaos. As long as the country is without political cover, it is subjected to dangers. There is no government and there is complete failure in the constitutional process of forming a government.

The growing security concerns also reflect a fast deteriorating financial crisis in a country that is among the most indebted in the world. Amid dollar shortages, Lebanese banks have imposed unprecedented financial controls to preserve liquidity. This further paralyzed the country and forced up prices amid fears of financial collapse.

Businesses and households have been thrown into disarray. Residents say they don’t know how they will come up with dollar payments needed to pay for tuition, health insurance and housing loans. Companies are struggling to transfer salaries to staff. Some have cut salaries or are simply laying off employees.

Some experts have suggested that a so-called haircut, in which the state takes a cut of depositors’ money to cover its debts, is inevitable to deal with the crisis. Central Bank Gov. Riad Salameh has denied this was an option.

On Wednesday, dozens of protesters gathered outside the Central Bank in Beirut’s commercial Hamra district, calling for fiscal measures that will not affect small depositors and the poor. Next to them, barbers and hairdressers were giving men and women free haircuts amid concerns about depositors’ savings.

Rebecca Saadeh, who was getting a free haircut, said:

They are imposing on us certain restrictions where people are not able to purchase medicine, and are unable to go to the hospital, while the big businessmen are able to transfer their money. People are desperate to get dollars to pay their rent or to buy food, which is spiking fabulously and then they accused us of protesting.

WILL CLOWN AOUN PIVOT AWAY FROM HEZBOLLAH?

Clashes between Lebanese protesters and Hezbollah thugs are putting Lebanon’s military and security forces in a delicate position, threatening to crack open the country’s dangerous fault lines amid a political deadlock.

Hariri had resigned Oct. 29 in response to the mass protests ignited by new taxes and the severe financial crisis. His resignation met a key demand of the protesters. Nonetheless, the country plunged into uncertainty with no clear path to resolving its economic and political problems.

Hariri had insisted on heading a government of technocrats. His opponents, to include the terrorist Hezbollah and the corrupt Amal Movement, want a Cabinet made up of both experts and politicians.

Bou Monsef said Hezbollah believes that a Cabinet comprised of technocrats that excludes the group would be a gift for America, which wants to keep it out of government.

Instead Hezbollah would rather destroy Lebanon.

WILL CLOWN AOUN PIVOT AWAY FROM HEZBOLLAH?