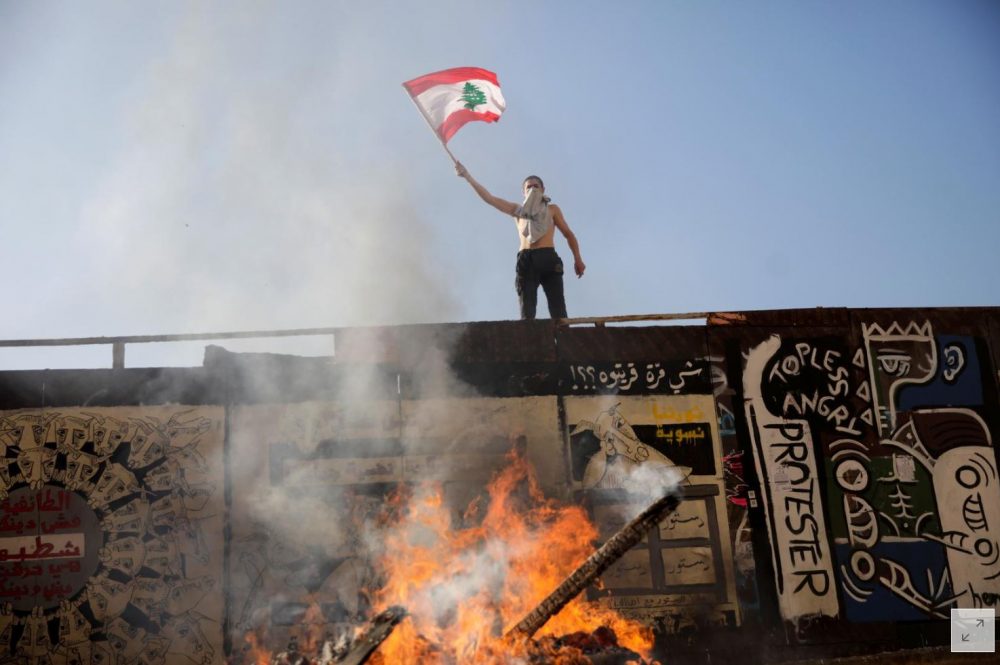 Lebanese protesters blocked a parliament session by closing roads and impeding traffic. It would have been the first time that parliamentarians had met in two months. The protesters blame the ruling corrupt elite for steering the country towards economic collapse.

Banks reopened after a one-week closure, with police stationed at branches and banks applying restrictions on hard currency withdrawals and transfers abroad.

The protests erupted last month, fueled by corruption among the sectarian politicians who have governed Lebanon for decades. Protesters want to see the entire ruling class gone from power.

Lebanon’s economic troubles have increased since then. Despite the depth of the economic crisis, the worst since the 1975-90 civil war, politicians have been unable to form a new government since Prime Minister Saad al-Hariri quit on Oct. 29.

Near parliament on Tuesday, gunfire was heard as several dozen protesters forced two SUVs with official plates and tinted windows to turn back as they approached the building, Lebanese television showed.

The vehicles sped away after they were struck by demonstrators chanting “Out, out, out!”

The video below shows multiple scenes of protesters’ unrest.

This is a new victory for the revolution and we are continuing until we achieve our goals.

The session’s agenda had included reelecting members of parliamentary committees and discussion of an amnesty law that would lead to the release of hundreds of prisoners. Protesters were angry the MPs were not tackling their demands for reform.

Security forces had fanned out before dawn, shutting down roads around parliament with barbed wire. Police scuffled with protesters who tried to remove a barbed wire barricade.

They should be meeting right now to form a new cabinet and not to pass laws, especially laws that aren’t urgent.

The economic crisis, rooted in years of government waste and corruption, has now filtered into the financial system which faces dollar shortages and a weakening of the pegged pound. Banks had mostly been closed since the protests started.

Though the banking association on Sunday had agreed a weekly cap of $1,000 on cash withdrawals from U.S. dollar accounts, some depositors found they could only withdraw a lesser amount.

Bank Audi told six customers they could only take out a maximum of $300. BankMed told several customers the cap was $400.

A banking source said the banks set the $1,000 figure as a ceiling; but for some customers it was less depending on the amount in their account.

Caretaker finance minister Ali Hassan Khalil said Lebanon was in “a critical condition” requiring a new government. But in the last few days he said there had been “no real new effort” towards forming one.

Hariri, who is aligned with Western and Gulf Arab states, wants to return as prime minister of specialist ministers devoid of any other politicians, while the Iran-backed Hezbollah and its allies say the government should include politicians.

Capital Economics said in a research note: “Pressure is growing on Lebanon’s dollar peg and, in the event of a devaluation, the pound could fall by as much as 50% against the dollar.”

The central bank has vowed to maintain its currency peg of 1507.5 to the dollar, in place since 1997. The dollar buying price on a parallel black market was 1820-1830 pounds on Tuesday according to five currency dealers, about 20% higher than the official rate.

Reuters contributed to his article.