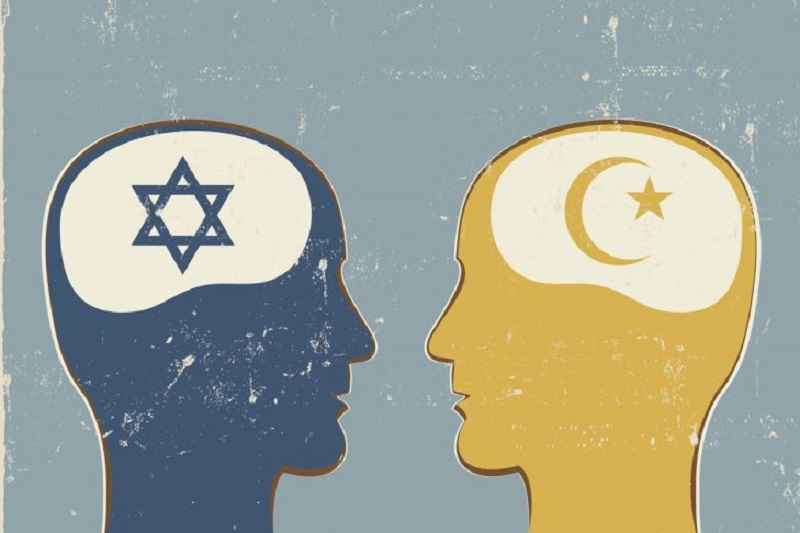 Between a Militant and a Democratic Faith

Religion is a reflection of the prestige countries enjoy in the space of human endeavor and advancement. The more accepting and open a religion is, the higher the chances its embracing people contribute to progress. The less open, the less its followers contribute to humanity. And nowhere this is as clear as in the Middle East where Islam and Judaism find it difficult to co-exist. In reality, it’s a clash between a militant and a democratic faith.

The modern difference between western religions and Islam can be summarized in one word: Sciences. With time, the indicators pointing to human evolution in western societies are inverted in Islam to show human decline. Why has to do more with religious edicts than with intelligence or geography.

MANY SIMILARITIES BETWEEN ISLAM AND JUDAISM

Prophet Mohammad borrowed from Judaism many of the rules in Islam. After all, Muslims and Jews worship the same God and they believe in some of the same Prophets.

Muslims pray five times a day, Jews three times. Both faiths circumcise their newly-born sons and both have similar food restrictions (no pork, Kosher and Halal meat). The most devout in both religions require women to cover their hair although this rule has become much more prevalent in Islam because it evolved in most men viewing hair cover as both a sign of devotion and submission to them. Until only recently, no Saudi woman could leave the house without her husband’s permission.

But this is where these small and inconsequential differences — in today’s modern world — end. Issues related to societal order tend to remain private matters that express the values and wishes of the adherents of either religion. For anyone to argue for or against these matters encroaches, without a doubt, on religious liberties.

However, on issues related to governance, which directly impact progress, there is a big divide between both faiths. One in particular, we believe, explains the reason why most Muslim countries, in existence for over 1,400 years, remain impoverished and some outright backward; and why Israel, in existence for less than 75 years, has contributed to the human experiment more than all of the Muslim countries combined.

When a child is encouraged to think freely instead of fearing to think, the world becomes accessible to test that child’s abilities

In Sunni Islam, for example, obedience is the sixth pillar no Muslim can, could, or would question. A thousand years ago, Muslim scholars defined the social order (al-Hadith) and the rules governing Muslims when it comes to everyday life. Matters that the story of Islam and its general rules could not address in the Koran. Think of the Koran as an essay on explaining the subject of, say, Genetic Engineering, and the al-Hadith as representative of all the laboratory experiments, formulas, and the collective results of the study of Genetic Engineering.

If the Koran did not tell Muslim women how to behave in the presence of men, the al-Hadith did. If Men did not know what to do if they missed a prayer during travel, the al-Hadith told them what the rules were.

Once the al=Hadith or al-Ahadiths (plural as they were many), were set, the Muslim scholars decreed to the detriment of the future of Islam that no one can question them, debate them, neglect them, or attempt to change them. They are set in a 1,000 year-old stone with the markings of the behavior of societies during that era. As far as many modern Muslims today, this militant approach to Islam has doomed Muslims to live in the past forever. And this explains the backwardness and lack of knowledge most Muslim countries suffer from today.

Some Muslim non-Arab modern countries, like Malaysia and Indonesia, ignored many of these rules, which explains why on the scale of economic and political evolution they fared much better than their Arab counterpart countries in the Middle East.

As far as Muslims are concerned, from a pool of over 300 millions, there have been only three Muslim scholars who earned the Nobel Prize in sciences

BETWEEN A MILITANT AND A DEMOCRATIC FAITH

When it comes to governance, Judaism, on the other hand, found the wisdom to not only survive but prosper beyond limits.

Judaism asks its adherents to always ask questions, always question the answers, and to think for themselves. Judaism goes as far as asking Jews to challenge their God, something that some Muslims may behead people for it. Muslims hardly realize the importance of this governance. By challenging God, their Supreme Creator, Jews are teaching their children to think freely, and never to let God stand in your way to see the possibilities ahead of you. When a child is encouraged to think freely instead of fearing to think, the world becomes accessible to test that child’s abilities. Something that is non-existent in Islam if one adheres to its strict rules.

There is a good reason why one third of all Nobel Prize laureates in sciences are Jews. One third that come from a pool of 15 million Jews worldwide and the other two-thirds from a pool of 7.5 billion people. Do you think Judaism had anything to do with this tremendous contribution? You bet, it had.

As far as Muslims are concerned, from a pool of over 300 millions, there have been only three Muslim scholars who earned the Nobel Prize in sciences. Only one who speaks Arabic named Ahmad Zweil. An Egyptian chemistry Nobel laureate.

Meanwhile, thank every Jew in the Middle East whose presence the last 75 years created the opportunities for some Muslims to see clearly their mediocrity

Why sciences are important? Because all the scientific disciplines follow the trail of facts. Because sciences show a person’s capacity to challenge the obvious and question any results. How could Muslim children challenge anything when their religion trains them to obey blindly? It’s evolutionary madness.

Armed with that knowledge, any wise Muslim would refute organizations like Hezbollah or Islamic State. They are killing any future hope for the Muslim countries to re-invent themselves by establishing new religious rules able to govern the masses skillfully in the modern world.

Meanwhile, thank every Jew in the Middle East whose presence the last 75 years created the opportunities for some Muslims to see clearly their mediocrity.

Between a Militant and a Democratic Faith

The Head of the Snake is Assad, Not Anwar Ruslan
The Global Defeat of Subversive Sunni Islam
President Trump Brave Decision to Target Iranian Leadership
Opinions 1017 Things That Matter 382