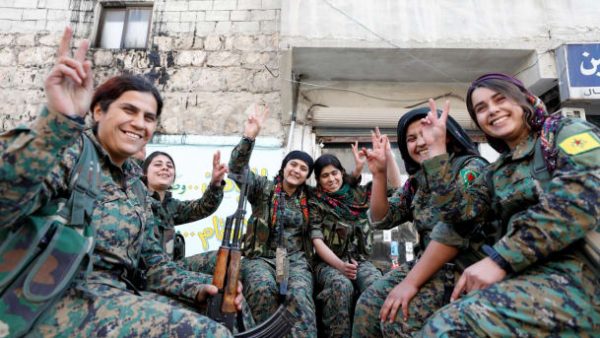 January 9, 2019 6:24 am 0
Assad Troops Clashed with Turkey Resulting in Syrian Casualties
US Troops in Syria Came Under Artillery Fire
Republicans React to Trump Abandoning the Kurds

There is a tug of war that has exacerbated the international and regional actors fighting for Syria’s soul. It revolves around the Kurdish minorities who are seeking a state of their own carved from lands in northern Syria. The Kurdish ambitions torn between Israel and Turkey both for and against a Kurdish state.

From Turkey’s perspective, a Kurdish autonomous state, similar to the one Iraq agreed to, will lead to carving Eastern Turkey for similar conditions in the future. Eastern Turkey is home to millions of Kurds whose nationalism sits in opposition to the spirit and dictate of Turkey’s elites. The conflict has spilled much blood over the years with both sides claiming the right for self-protection and self-preservation.

To stop the Kurds from any land grabbing in Eastern Turkey, it is paramount for the president of Turkey, Reccep Erdogan, to stop them first from land grabbing in Syria. This NATO country is feuding with the Trump administration over its support for Kurdish nationalist aspirations. The United States allied itself with the liberal and secular Kurds to finish ISIS in northern Syria.

From an Israeli perspective, a Kurdish sovereign country that straddles Iraq, Syria, Turkey, and Iran will be a force of liberalism to upset the motivations of these four nations each with a rich history of antisemitism. Each is able to switch on Islamic religious fervor to combat Israeli presence in the region. With about 20-25 million Kurds in the center of the northern region of the Middle East, Israel can ally herself with a partner who will carry some of the weight in confronting extremism and violence. Ergo, the Israeli support for the Kurdish cause.

The Kurdish ambitions torn between Israel and Turkey.

From a U.S. perspective, a Kurdish autonomous state will serve as an early warning system for extremism emanating from four mostly Muslim countries. The Kurds are secular Muslims with no history of anti-Americanism. Such a partner, in the long run, will save American lives because it can act as a proxy to American interests. To include waging battles as the Kurds have successfully waged against ISIS with U.S. help. That American perspective is causing friction between NATO Turkey and the U.S.

Trump has upset the balance to the Kurdish ambitions torn between Israel and Turkey when he abandoned Syria leaving israel alone fighting the terror or Iran and the Turkish Muslim Brotherhood Erdogan is behind.

When President Trump announced his immediate Syrian withdrawal peppered by statements such as “They [the Iranians} can do whatever they want”, it sent shock waves through our foreign policy establishment.

For one, giving up on Syria when the costs are limited and when American lives are not at stake is tantamount to helping directly Turkey by not only abandoning the Kurds to the whims of Erdogan, but also abandoning Israeli security to the whims of Assad, Putin, and Khamenei. A free Iran in Syria represents an existential threat to the Jewish State. This is why the uproar over Trump’s whimsical Syrian exit did not sit well with half the western world.

When Trump decided to exit Syria, he knew exactly what the costs will be to Israel. Early during his campaign, some leveled accusations against Trump for his antisemitism. Trump closed that loop when he claimed he married  his daughter to a Jew. How could he be antisemitic, he claimed? Ivanka Trump is married to Jared Kushner.

Today, however, those accusations are proving to be right. Why did Trump exit Syria using such an inflammatory statement with regard to Iran “doing what it wants”? Is it because Michael Cohen, a Jew, betrayed him ? Or is there another motivation surrounding some Jewish connection Trump felt is harming him and his family?

Only Trump knows the answer to this question. One day, we may all be privy to Trump’s complex mind willing to turn on you with a finger snap.