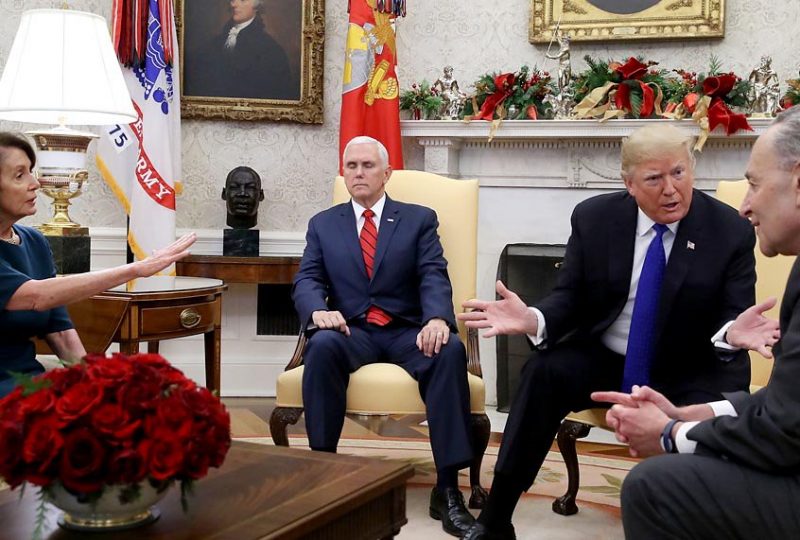 January 2, 2019 9:17 am 0
Did you know Hezbollah was pregnant?
Israeli Solution for Syria Has Mack Truck Sized Loopholes
When Fear of Islamism Trumps Fear of Hitlerism

The Trump phenom keeps intriguing us, scaring us, and embarrassing us plenty. Along the way, this president makes more powerful enemies per day than Russia makes Vodka in a month. In reality, Donald Trump collects enemies like the Hoover dam collects water.

One would think that after losing control of Congress, Trump would temper his anger to adjust to the new realities, but he seems oblivious to the danger lurking. All these powerful figures he turned into perpetual enemies have him in their scope, and many cannot wait to take him down. Trump, for all intended purposes, might yet end up wearing an orange prison suit instead of a Brioni suit. Donald Trump collects enemies like the Hoover dam collects water.

The president’s sword and shield is Twitter. Without this medium, Trump is but a hollow symbol occupying a powerful office. When no longer a sitting president, his followers, now standing at 56.8m, will most likely shrink considerably. Who wants to read the rantings of an old man with so little power? It is highly probable, he would be the most powerless ex-president in American history after he leaves the White House. Can you think of anyone listening to him or taking his advice?

The question on everyone’s mind is why Donald Trump is so good at making so many enemies?

TRUMP THINKS HE IS UNTOUCHABLE

For one, he believes he is untouchable.  Trump does not see our political leaders, the Intelligence community, the armed forces leaders, and other institutions he belittled so often as a threat to his personae. The immense privileges he was born into have shielded him all his life, even when breaking laws; so why should he think any differently today? Hillary Clinton, to a lesser extent, feels the same way.

Losing his fixer Michael Cohen has not tempered his disposition to insult people like a schoolyard bully. No lawyer would be willing to walk his walk or talk his talk. By the time he realizes prison is the only option, it would be too late to backtrack. That’s how good Trump is at collecting enemies he derives much joy from transforming.

THEY ARE ALL SUB-CONTRACTORS

Secondly, Donald Trump is a real estate developer. As such, he views everyone he deals with as he sees construction sub-contractors. Nancy Pelosi? A sub-contractor who did not like working for him. Hillary Clinton? A developer-competitor he despises like he despised Conseco Real Estate in NY.  The Generals and Admirals he has been insulting lately on Twitter? Just sub-contractors for his plumbing and electrical work.

Trump does not see them as powerful men and women enemies, but as inferior construction workers challenging his narcissistic authority.

Besides some second-rate TV hosts at Fox News, why do his various cabinet appointees remain quiet when he picks a fight with someone? You don’t see them rush to his aide but rarely. Even the Vice-President takes a nap when Trump is punching left and right. Who could forget Mike Pence sleepy eyes during the heated exchange between Trump, Pelosi, and Schumer about funding a wall on the Mexican borders?

It’s Trump against more than half the country backed by the most powerful American institutions whether their inclination is on either of the isle. All he has are half-Nazis dimwits, clueless Klu members, and far-right nutcases conservative Americans hate with passion.