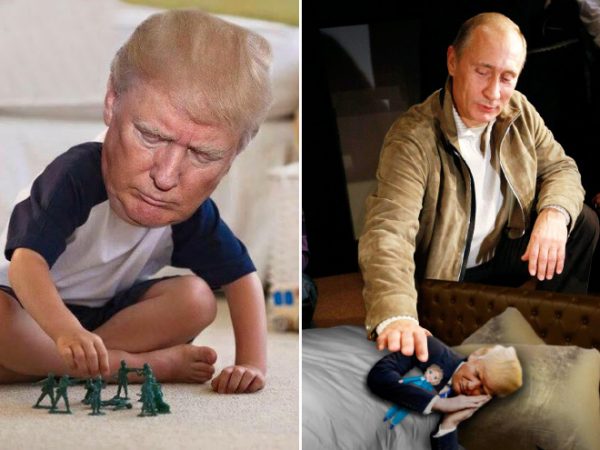 What a Spoiled Dumb Kid Would Tell His Mother

Hypothetically speaking, this is what a spoiled dumb kid would tell his mother when dealing with her on non-sequential matters.

Mary Anne: Donald, I want you to wash your hands before dinner.

Mary Anne: Still, I want you to wash them.

Donald: I washed this morning. I am not washing them again.

Mary Anne: If you don’t wash your hands, I will tell your father.

Donald: Go ahead. And by the way, I am skipping dinner all together because of you.

Then Donald utters his eternal words “They can do whatever the hell they want”.

President Donald Trump repeated these similar words again upon deciding to leave Syria sooner than later. “They” being the Iranians now entrenched in the country like a cancer entrenches into a pancreas. Trump’s reaction and the words he uttered remind us all of a spoiled dumb kid talking trash to his parents knowing well he won’t be accountable for any action.

Just imagine how uninformed and biased are the people who voted for this clown. This is a sitting president who, whimsically and without thinking, dictates policy, makes statements that are not factual, and plays the spoiled dumb kid with the country’s national security and interests.

Barack Obama, before him, favored Iranian hegemony in the region by launching their invasions with $150 billion grand transfer.  Trump, after him, is now confirming he is Obama II also favoring Iran to continue its occupation of other countries and people. Abandoning the Middle East to both Russia and Iran will come back to haunt us when we look for Arab allies and find them all sharing the beds both Khamenei and Putin made for them.

IMPACT OF ABANDONING THE KURDS

The impact of abandoning the Kurds still echoes around the world. The spoiled dumb kid Donald did not consider its consequences. Show us a future ally willing to trust the United States with the commitments it makes and we will show you a blue elephant. Even nations that trust NATO would protect them from the Russian bear would now have doubts if Russia decides to invade one of them. Supposedly, the United States, under the treaty, would have to step up to protect its NATO partners. But with Trump, it seems highly unlikely he will commit to anyone’s protection. Unless, they would volunteer to build him a Trump Tower in their capitals, that is.

Who would blame them when Donald Trump abandoned the Kurds on a whim? He could easily say, in addressing Russian aggression against Ukraine, “They can do whatever the hell they want”.

Speaking of Ukraine, the Russians are amassing militarily on their borders. And although Ukraine is not a NATO country, it behooves us to admit the country into the alliance to play a chess move that would block Putin to interpret Trump’s words for the Iranians as if they were addressed to him for the Ukraine.

Let’s admit it. Our president acts like a spoiled dumb kid who believes his posturing will create immediate advantages. Like threatening his mother he will skip dinner. Maybe, it is time to remove him from office. This spoiled dumb kid is truly a threat to America’s security.

What a Spoiled Dumb Kid Would Tell His Mother