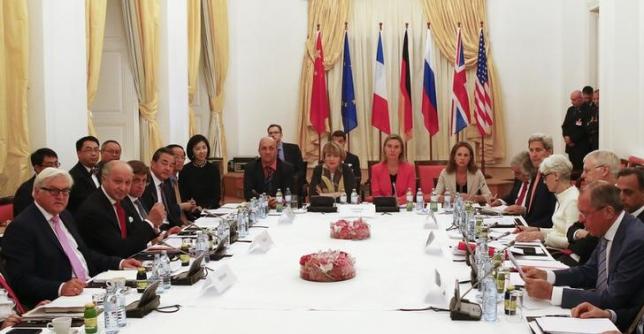 Bad Day For the Civilized World. Good Day for Terror

July 14, 2015 5:24 am 0
Saudi Response to Russian Terror is Slow Coming
Who Else Would Like to Kill and Abuse Syrians?
Policy of Terror Management

France is celebrating its Bastilles Day today, but July 14 will also commemorate an infamous achievement as Iran and six major world powers reached a nuclear deal on Tuesday, capping more than a decade of on-off negotiations with an agreement that could potentially transform the Middle East, and which Israel called an “historic surrender”.

This is a bad day for the civilized world.

As the world powers capitulated to Hitler during the Munich Agreement, today’s world powers are capitulating to Iranian terror and violence in Vienna. The world will come to regret this day as badly when Iran begins threatening more than poor Muslim Arab countries.

Under the deal, sanctions imposed by the United States, European Union and United Nations would be lifted in return for Iran agreeing long-term curbs on a nuclear program that the West has suspected was aimed at creating a nuclear bomb.

Reaching a deal is a major policy victory for both President Barack Obama whose aims are to relinquish U.S. power in the Middle East and Iran’s Ali Khamenei’s whose aims are to spread his culture of terror as the U.S. pulls out.

Today marks a bad day when Obama fully capitulated to terror and violence in one of the most turbulent regions of the world.

Obama faces skepticism at home from all Republicans and many Democrats after decades of enmity between the two nations in which Iran referred to America as “the Great Satan” even when the Obama administration rejected the notion Iran belonged to the “axis of evil”.

Israeli Prime Minister Benjamin Netanyahu called the deal “a bad mistake of historic proportions.” We could not agree with him more as Obama unleashes Iranian terror upon 350 million Arabs who are culturally and historically disconnected from the Farsi-speaking nation of Iran.

PM Netanyahu said about this bad day what every Arab leader was thinking:

“Iran will get a jackpot, a cash bonanza of hundreds of billions of dollars, which will enable it to continue to pursue its aggression and terror in the region and in the world. Iran is going to receive a sure path to nuclear weapons.”

Israeli Deputy Foreign Minister Tzipi Hotovely called the deal an “historic surrender”. She said on Twitter that Israel would “act with all means to try and stop the agreement being ratified,” a clear threat to try and use its influence to block it in the Republican-controlled U.S. Congress.

U.S. Congress has 60 days to review the deal, and if it votes to disapprove of it, Obama can veto the rejection. It would require two thirds of lawmakers to override such a veto, which means some of Obama’s fellow Democrats would have to rebel against one of the signature achievements of their president in order to kill the deal.

Furthermore, in addition to Israeli worries, Arab allies in the region are deeply concerned about an agreement that would benefit Iran and would provide it with even more means to terrorize the region. This is a bad day for all Arabs.

How will Saudi Arabia respond to this agreement and this bad day when world powers capitulated to Iran remains to be seen. Saudi patience with Iran ran out the day Iran began destabilizing Yemen with its support for the Houthi terrorists.

Bad Day For the Civilized World. Good Day for Terror