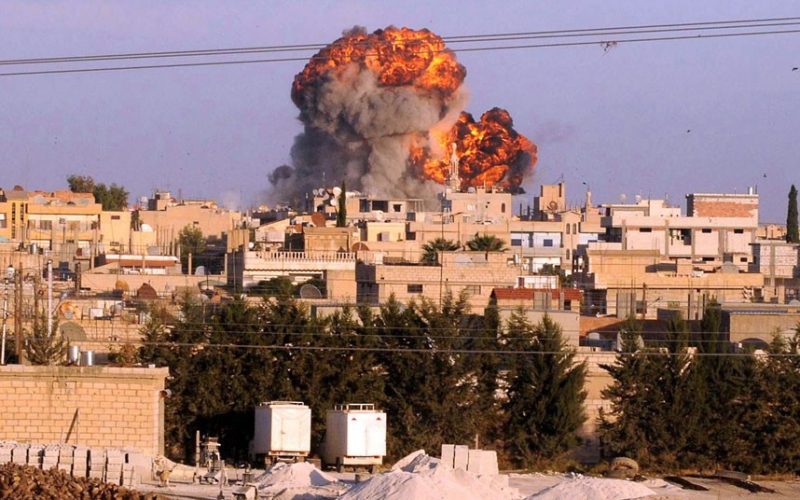 October 18, 2019 5:23 am 0
Erdogan Strikes Assad Forces Will Make Him a Hero
Assad Is Angry Over His Inability to Steal Syria’s Oil
ISIS Excuse Fosters Syrian Occupation and Oppression

Shelling and gunfire resounded around the northeast Syrian town of Ras al Ain on Friday, a day after Turkey agreed with the United States to pause its offensive in Syria for five days to let Kurdish forces withdraw. The Turkish Kurdish fighting resumes pronto.

Residents of the Turkish town of Ceylanpinar could hear machine-gun fire and shelling across the border from Ras al Ain. Some smoke rose from one part of the Syrian town.

The U.S. Vice President Mike Pence announced the truce some 13 hours earlier after talks in Ankara with Turkish President Tayyip Erdogan. Turkey agreed to the five-day pause to let the Kurdish-led SDF militia withdraw from a “safe zone”.

President Donald Trump praised the deal on Twitter. He claimed it would save “millions of lives,” while Turkey cast it as a complete victory.

If implemented, the deal would achieve all the main objectives Turkey announced when it launched its assault on Oct. 9.

Republican and Democratic senators accused Trump of having betrayed the Kurdish allies who were vital in fighting Islamic State militants, of brushing aside the humanitarian costs of Turkey’s invasion and of being outwitted by Ankara.

It was unclear what if any damage came from the shelling heard on Friday.

It was also unclear whether the Kurdish-led Syrian Democratic Forces (SDF) would fully comply with the agreement.

SDF commander Mazloum Kobani told Kurdish broadcaster Ronahi TV late on Thursday the group would accept the ceasefire agreement. He also said it was limited to the border areas running between Ras al Ain and the town of Tal Abyad.

The joint U.S.-Turkish statement released after the talks in Ankara said:

The safe zone will be primarily enforced by the Turkish Armed Forces.

It said Washington and Ankara would cooperate on handling Islamic State fighters and family members held in prisons and camps, a major international concern. Pence said the U.S. is willing to lift the sanctions the U.S. imposed once the ceasefire became permanent.

In Washington, U.S. senators who have criticized the Trump administration for failing to prevent the Turkish assault in the first place said on Thursday they would press ahead with legislation to impose sanctions against Turkey despite the ceasefire announcement.

A Turkish official told Reuters that Ankara got “exactly what we wanted” from the talks with the United States.

Turkish Foreign Minister Mevlut Cavusoglu described the deal as a pause. Solely to allow the Kurdish fighters to withdraw. The Kurds must leave behind their heavy weapons.

It has created a new humanitarian crisis in Syria with – according to Red Cross estimates – 200,000 civilians taking flight, a security alert over thousands of Islamic State fighters potentially abandoned in Kurdish jails, and a political maelstrom at home for Trump.