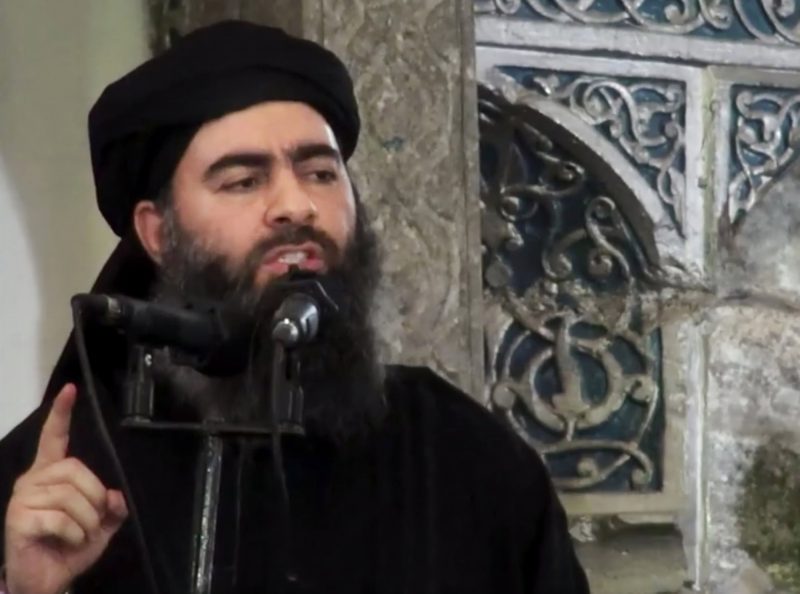 March 24, 2019 4:37 am 0
ISIS Developing Chemical Weapons to Use on Alawistan
It’s The Proliferation, Stupid: The World Dodged a Bullet in Syria – Thanks to Israel
IS came with a hit list, left Syria town in a trail of blood

the SDF killed The Islamic State group has lost all the territory it once controlled in Iraq and Syria, but its shadowy leader and self-proclaimed “caliph” is still at large. Islamic State mission remains unaccomplished as leader escapes justice.

With a $25 million U.S. bounty on his head, Abu Bakr al-Baghdadi is the world’s most wanted man. He is responsible for steering his chillingly violent organization into mass slaughter of opponents and directing and inspiring terror attacks across continents and in the heart of Europe.

Despite numerous claims about his death in the past few years, al-Baghdadi’s whereabouts remain a mystery. He appeared in public only once, in 2014. Since then, U.S. forces killed many of his top aides, mostly in U.S.-led coalition airstrikes.

He is among the few senior IS commanders still at large after two years of steady battlefield losses. Losses that saw the self-styled “caliphate” shrink from an area the size of Britain to a tiny speck in the Euphrates River valley.

U.S. forces see him largely as a symbolic figurehead of the global terror network — some even described him as “irrelevant for a long time”. However, the U.S. believes capturing al-Baghdadi’s is a coveted prize. This means Islamic State mission remains unaccomplished.

But so far, he has eluded the Americans, Russians, Syrians, Iraqis and Kurds.

In the last days of IS, as U.S.-backed Syrian Democratic Forces zoned in on the last slice of territory held by the militants in eastern Syria — a couple of villages and farmlands near the Iraqi border — the possibility remained that al-Baghdadi would turn up there. Several hundred IS leaders and fighters made a last stand in the enclave before surrendering.

On Saturday, the SDF forces declared that they liberated the last pocket in the eastern village of Baghouz after weeks of fighting. During the siege, civilians streamed out of the pocket and surrendered. But there has been no sign of al-Baghdadi.

The Coalition is not holding him nor do we know where he is,

Mohammed Kheder, co-founder of the Sound and Picture group which documents IS, said the last time al-Baghdadi was spotted in the area was about 15 months ago, citing sources on the ground and the testimony of the people who left the area.

In Twitter posts, Kheder’s group has said it cannot rule out the possibility al-Baghdadi was detained long ago.

Another official, a colonel, said the Americans recently targeted some of al-Baghdadi’s closest people. It included his personal bodyguard Khaled al-Saudi the SDF killed last week near the area of al-Baaj along the Iraqi-Syrian border.

U.S. forces arrested Al-Saudi’s wife. They also killed recently a close aide to al-Baghdadi and captured his wife. U.S. forces believe that such targets will soon lead them to al-Baghdadi because Islamic State mission unaccomplished. Both officials spoke on condition of anonymity to share intelligence information.

Al-Baghdadi was born Ibrahim Awwad Ibrahim Ali al-Badri al-Samarrai in 1971 in Samarra, Iraq. He adopted his nom de guerre early on. According to IS-affiliated websites, U.S. forces detained him in Iraq and sent him to Bucca prison in February 2004 for his anti-U.S. militant activity. Meanwhile, Islamic State mission remains unaccomplished.

U.S. forces released him 10 months later, after which he joined the al-Qaida branch in Iraq of Abu Musab al-Zarqawi. He later assumed control of the group, known at the time as the Islamic State of Iraq.

After Syria’s civil war erupted in 2011, al-Baghdadi dispatched comrades to the neighboring country to create a like-minded Sunni extremist group there. The group, which came to be known as the Nusra Front, initially welcomed moderate Sunni rebels who were part of the uprising.

Over time, more of his fighters and possibly al-Baghdadi himself relocated to Syria. He wanted to pursue his plan to restore a medieval Islamic state, or caliphate. In April 2013, al-Baghdadi announced what amounted to a hostile takeover of the Nusra Front. Eventually, he swallowed the Nusra Front and created a new group known as the Islamic State of Iraq and the Levant. Nusra Front’s leader Abu Mohammad al-Golani refused to accept the takeover. So did al-Qaida’s central leadership, which broke with al-Baghdadi.

Al-Baghdadi’s fighters went onto to capture a contiguous stretch of territory across Iraq and Syria. The lands included key cities such as Raqqa in Syria and Mosul in Iraq. In June 2014, the group announced its own state, or caliphate. Al-Baghdadi became the declared caliph of the newly renamed Islamic State group.

The group ruled with a virulently extreme interpretation of Islamic law. The atrocities, massacres and beheadings by al-Baghdadi’s militants that followed — many broadcast in grisly and macabre video postings on militant websites — secured IS a spot in some of the darkest, most brutal annals of modern history.

Throughout it all, al-Baghdadi remained in the shadows.Today, the Islamic State mission remains unaccomplished.

His only known public appearance on video was on June 29, 2014, when he appeared as a black-robed figure to deliver a sermon from the pulpit of Mosul’s Great Mosque of al-Nuri in which he urged Muslims around the world to swear allegiance to the caliphate and obey him as its leader.

Little is known about al-Baghdadi’s family. Lebanon detained an ex-wife, Saja al-Dulaimi, and her daughter from al-Baghdadi, in 2014. Lebanese authorities released her a year later as part of a swap with al-Qaida in exchange for kidnapped Lebanese soldiers and policemen. In July 2018, the SDF forces killed al-Baghdadi’s son, Huthaifa al-Badri.

No authority has been able to confirm, in any subsequent reports, al-Baghdadi’s death. In 2017, Russian officials said there was a “high probability” their air strikes killed him on the outskirts of Raqqa. U.S. officials later said they believed he was still alive.

He resurfaced in late September 2017, calling in an audio message on followers to burn their enemies everywhere. Al-Baghdadi posted another audio last August in which he urged followers to “persevere” in fighting IS’ enemies.

No one heard his voice ever since.