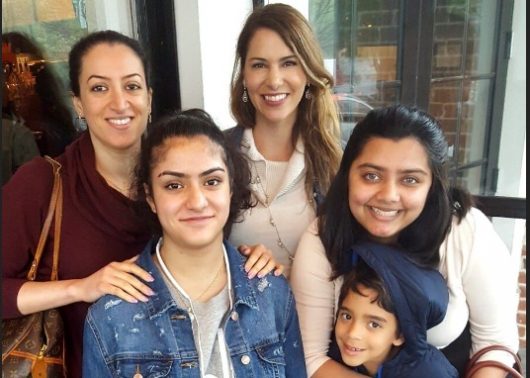 One of the four Americans killed in a suicide bomb attack in Syria this week was a Navy sailor and married mother of two whose father is a high-ranking officer in the New York State Police, officials said Friday. The Syria attack hit American families hard.

The Pentagon identified three of the four Americans killed in Wednesday’s attack in the northern Syrian town of Manbij.

They are Army Chief Warrant Officer 2 Jonathan R. Farmer, 37, of Boynton Beach, Florida, who was based at Fort Campbell, Kentucky; Navy Chief Cryptologic Technician (Interpretive) Shannon M. Kent, 35, of Pine Plains, New York, and based at Fort Meade, Maryland; and a civilian, Scott A. Wirtz, from St. Louis.

HER SMILE LET UP THE ROOM

The fourth victim is a Syrian-American named Ghadir Taher, 27. She immigrated with her family from Syria. Taher succumbed to her wounds, her younger brother, Ali, told The Atlanta Journal-Constitution Friday.

His voice edged with emotions, he said:

Her smile lit up the room. She was kind. You could go on for hours, talking to her about your worries and about your troubles. And she would make them seem like they were hers.

The family learned of her death from her employer, Valiant Integrated Services, a defense contractor, he said.

In an email to the newspaper, Valiant spokesman Tom Becker confirmed the death, adding they were “extremely saddened by the tragic and senseless passing” of Ghadir Taher.

The attack, claimed by the Islamic State group, also wounded three U.S. troops and was the deadliest assault on U.S. troops in Syria since American forces went into the country in 2015. It is possible the Assad or Iranian regimes used ISIS as a proxy to terrorize in order to induce a more rapid Syria withdrawal Donald Trump ordered without any regard for its consequences.

The Pentagon’s statement said Kent was from upstate New York but didn’t give a hometown. New York Gov. Andrew Cuomo said in a statement Friday that she was from Pine Plains and was the daughter of state police field commander Col. Stephen Smith, the agency’s third-highest position.

“We owe her our eternal gratitude for her selfless dedication and sacrifice,” Cuomo said while ordering flags on state government buildings to be flown at half-staff in Kent’s honor.

Grieb said Kent moved away after enlisting in the Navy in 2003.

“She was an honor student and a fabulous person,” Grieb said. “We are proud of her and her service and we support her family 100 percent in their time of sorrow.”

Kent, who lived in Maryland with her husband and two children, was assigned to the Cryptologic Warfare Activity 66 based at Fort George Meade.

Cryptologic technicians are part of the Navy’s intelligence-gathering apparatus, analyzing encrypted electronic communications and using computers and other technology to compile information on the nation’s enemies.

Cmdr. Joseph Harrison, the unit’s commanding officer, said in a statement that Kent “was a rockstar, an outstanding Chief Petty Officer, and leader to many in the Navy Information Warfare Community.”

Florida’s Palm Beach Post reported that Farmer’s parents loaded suitcases into a friend’s SUV on Friday morning before heading to Dover, Delaware, for the return of their son’s remains.

Duncan Farmer said they knew Jonathan, a Green Beret, was in Syria, but “we didn’t know exactly where.”

Jonathan Farmer was born in Boynton Beach, Florida, south of West Palm Beach. He grew up in Palm Beach Gardens, attending the Benjamin School before going to Bowdoin College in Maine.

His father said Jonathan Famer was in the military for 13 years and had been in dangerous places “many times,” including Syria, Afghanistan and Iraq.

He said services will be at St. Patrick Catholic Church in Palm Beach Gardens, but the family has not set a date yet. He said internment will be at Arlington National Cemetery.

In Missouri, Gov. Mike Parson asked Missourians to pray for the family of Wirtz, a former Navy SEAL who was working for the U.S. Defense Intelligence Agency as an operations support specialist.

Wirtz “died bravely serving our nation in a dangerous part of the world, and for that we are grateful,” Parson said. The Syria attack hit American families hard.