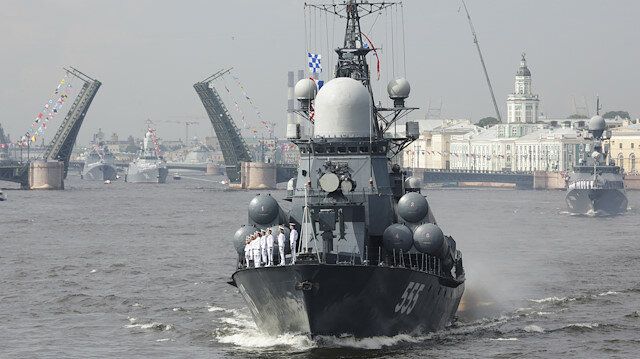 Russia is Sending Two Warships to Syria. NATO to Meet

February 28, 2020 3:51 am 0
The Assad regime continues to block humanitarian aid for Syria
Germany is Set to Prosecute Assad Torturers
Russia Will Continue Killing Civilians in Syria

It was announced on Friday that Russia is sending two warships to Syria armed with cruise missiles and it blamed Ankara for the killing of its soldiers in Syria’s Idlib region the previous day.

The killing of the Turkish soldiers on Thursday and the wounding of 32 others, announced by the governor in Turkey’s Hatay province bordering Syria, raised the Turkish military death toll in the region to 54 this month.

Meanwhile, Ambassadors from the NATO military alliance are holding emergency talks Friday at the request of Turkey. Turkey requested the meeting following the killing of 33 Turkish soldiers in northeast Syria.

NATO Secretary-General Jens Stoltenberg said in a statement that NATO would be holding the talks under Article 4 of NATO’s founding treaty. The article allows any NATO Member to request consultations if it feels its territorial integrity, political independence or security is threatened.

The air strike by Syrian government forces that killed the Turkish soldiers in northeast Syria marks the largest death toll for Turkey in a single day since it first intervened in Syria in 2016.

The deaths were a serious escalation in the direct conflict between Turkish and Russia-backed Syrian forces.

Turkey has sent thousands of troops and heavy military hardware into Syria. Erdogan has warned that Turkey will launch a full-scale offensive to repel Syrian forces; unless they pull back from Turkish observation posts in the region.

Responding to Thursday’s killings, a senior Turkish official said that Ankara would no longer stop Syrian refugees from reaching Europe. Turkey blamed an air strike by Syrian government forces, with help from Russia, for the deaths.

Russia’s Defense Ministry said that the Assad regime hit the Turkish troops by artillery fire as they were trying to repel an offensive by rebel forces.

It said that Ankara had failed to notify Moscow of the presence of Turkish troops in the area. This despite being in regular communication with the Russian military.

Turkey deployed its troops directly alongside anti-government rebels. But according to information provided by Turkey there were no Turkish troops in the area. Russia said that Turkish forces “shouldn’t have been there.”

Russian war planes did not carry out any air strikes in the area at the time of the incident.

That included ensuring Syrian forces stopped shelling to allow Turkey to evacuate its dead and wounded.

Russia is Sending Two Warships to Syria. NATO to Meet