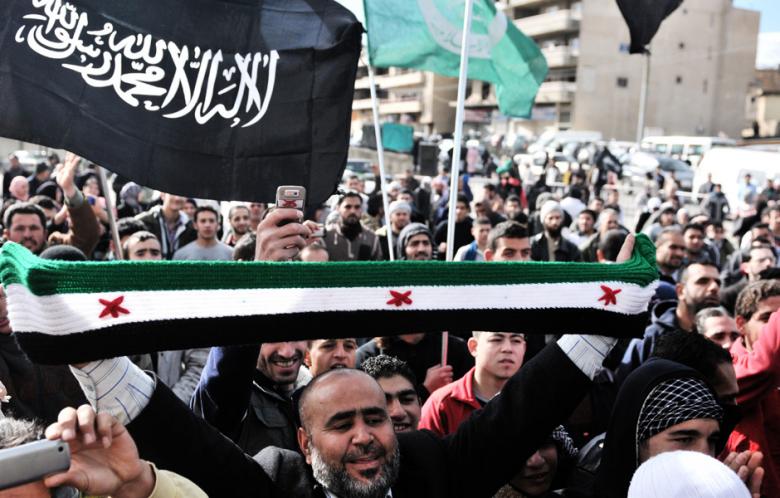 Syrians Lost their Country Because of Islam

Few years back, many analysts predicted the downfall of the Assad regime. Today, many of them have concluded that the butcher of Damascus has won the war and buried his opposition. How did the opposition lose with all the global support they initially mustered? It’s simple. Syrians lost their country to the brutal Assad regime because of Islam.

Before you issue a Fatwa against Terror-Free Syria, do follow, below, the facts and the logic behind this argument.

When the uprising began on March 15, 2011, after the Assad regime brutally tortured 15 boys for their graffiti in support of the Arab Spring, Syria began seeing some timid protests start across few towns. However, on April 29, 2011, the Assad regime captured a boy protesting, tortured, and killed him. His name was Hamza al-Khateeb. His age was 13. Hamza’s body was delivered to his parents with his genitals stuffed in his mouth.

Syria’s Revolution was now in full swing with many large cities taking part.

If one watches the thousands of videos taken of those protesting being shot dead in the streets, one could easily see how organic and religious-free the Revolution was. Young beardless men would step in the line of fire to rid Syria of the brutal Assad family. The world sided with the Syrian people against Assad. That historic moment was the reason many analysts predicted the downfall of the regime.

Meanwhile, the regime was running out of options. The more Assad killed, the more Syrians were determined to free their country of his rule. The air was thick with the quick downfall of the regime.

The Obama Administration refused to come to the aid of the Syrian people, prior to the Revolution swinging towards Islam, in any form or shape (Except with aid to the UN and some NGO’s). Obama duplicated the same tactic towards the Iranian people when they started the Green Revolution. He ignored everyone including the Ukrainians suffering from the Putin invasion.

Then something happened that caused the first stage of failure of the Revolution. The Muslim Brotherhood, a religious Shariaa-based organization with roots that date back to the sixties in Syria, began taking over the Revolution. The MB was a well-organized entity capable of, in the absence of any coordinated effort by the people, owning the Revolution. Overseas, they tried and succeed in controlling the Syrian opposition because mostly of Qatari funding and the al-Jazeera publicity.

Although free of religion initially, except for few protesters shouting “Allah Wa Akbar”, the MB propaganda was ablaze on social media. As the MB garnered more support because of its media’s sophisticated machine, it began to grow more confident that the world will have no choice but to accept the inevitable fall of the regime to be replaced by the MB.

Soon enough, “Allah wa Akbar”, to Assad’s delight and appreciation, became the mantra of the Revolution. Thanks to the Muslim Brotherhood, those three words kept Assad in power. If God is so great, where is He today siding more with Assad than the hapless Syrians?

Soon enough, Syrians were tired of being shot while the west comforted them with their kind words. With a small push from Assad to show the world who will replace him, DAESH (ISIS) began running in Syria towards the end of 2012. It garnered mush support internally and externally. Joining DAESH, now funded by clandestine Arab wealthy men, was accelerated by further support from the Assad regime, which allowed DAESH to take over the oil installations and then buy it directly to fund extreme Islam.

The rest, of how Syrians lost their country, is history. The Syrian Revolution now had three groups all vying for control. On one side, the Assad rule, on the other the MB screaming “We told you so” (On the account that if not them then more extreme Islam would rule), and the third was the ugly side of DAESH.

If you were a post-Obama western leader, with immense powers to change the landscape in Syria, what choice would you make?

Syrians lost their country because of Islam.

Today, the United States has almost defeated DAESH. While the US was taking care of DAESH, Assad, Khamenei, and Putin were killing and ethnically cleansing Syrians to the tune of over 5 million people now mostly refugees in Jordan, Lebanon, and Turkey.

That is where “Allah wa Akbar” led the Syrian people. To neighboring Arab countries.

Now that Syrians lost their country to the brutality of the Assad regime, what lesson Syrians and the rest of the world should learn from the war in Syria? Three things:

1- Keep the Muslim religion out of revolutions. If you cannot be secular and democratic, you don’t deserve your freedom because Islam will take it from you anyway.

2- Do not be a chameleon. The west is too smart to fall for Islamist hidden agendas or illicit propaganda (This moment was an exception).

3- Do not forget where “Allah wa Akbar” has led Syrians to. It destroyed them, and God could care less whether you think He is great or not.

Syrians Lost their Country Because of Islam