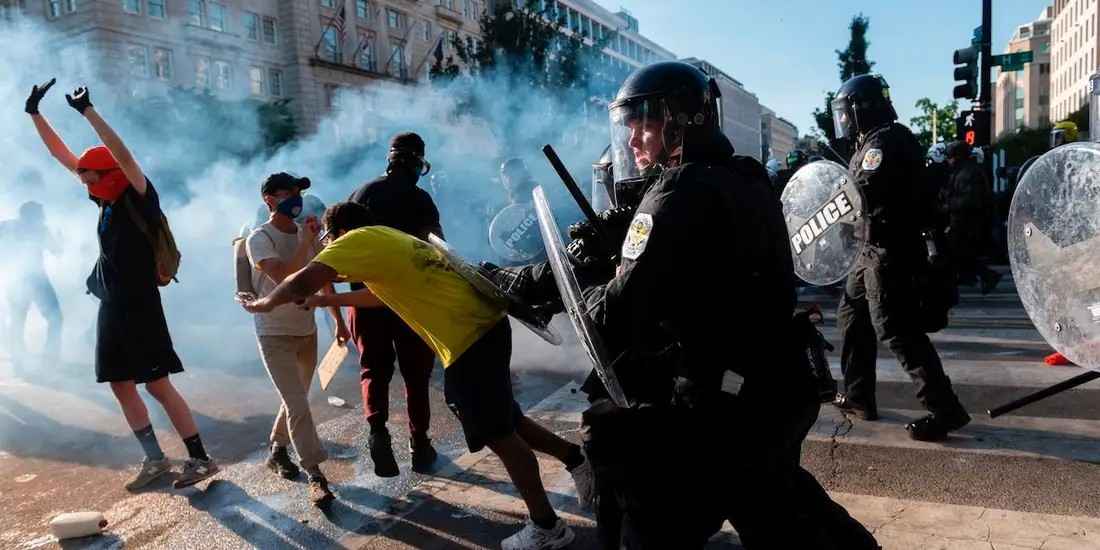 America Needs an Aggressive President Abroad and Not at Home

June 7, 2020 11:39 am 0
What is Mohammad Zarif Doing in Lebanon?
Senate Rebuked President Trump Over Syria
One Cannot Take the High Road with Donald Trump

The images of President Trump demonstrating strength by gassing with mace peaceful protesters just for a photo op-ed will go down in history as one of our worst moment of our young Republic. On the other side of the equation, Trump’s strength vis-a-vis the Khamenei regime in Iran is a source of pride to many Americans. Most of whom have grown tired of wimpy Presidents unable to confront two-bit dictators. Both examples, though, are indicative of one fact: America needs an aggressive president abroad. Not at home. The last America needs domestically is an aggressive commander-in-chief disrespecting our constitutional rights and dividing us along racial lines.

The St. John Church photo-up, taken across the street from LaFayette Park, showed the world how weak our democratic institutions could be in the face of an autocratic President intent on ignoring the U.S. Constitution. With the exception of two GOP Senators (Romney and Murkowski), all remaining 51 Republican Senators remained silent. To their shame.

Needless to state that some of the worst dictators in the world saw Trump as their brother-in-arm. He gassed peaceful protesters just as they gas theirs. No American should ever forget how debasing Trump’s photo-op has been. Indeed, historians will talk about it at length for generations to come. In terms of chronicle importance, it surpasses Richard Nixon infamous “I am not a crook” because it trampled on our most sacred right. The right to assemble and speak our minds peacefully.

THE ENEMY LIVES OUTSIDE OUR BORDERS

For reasons known only to Trump’s psychiatrist, this President believes some Americans are the enemy. He thinks that anyone defying his views of what America should look like is an enemy of the state. And because Trump is a racist and a bigot, people assembling peacefully to protest police brutality against the African-American George Floyd are therefore the enemy. Our President does not realize how dangerous his powers could become to our democracy, and because he has surrounded himself with “yes” aides, Marine General James Mattis had no choice but to club him on the head by issuing a timely statement.

Our enemies exist outside our borders. Not here at home. We have many countries around the world who wish us harm. They attack our American values on a daily basis, and some are going as far as interfering in our political system and elections. By ignoring the economic disparity and the injustice African-Americans have endured in this country since 1619 and continue to endure in 2020, we are betraying our own values championing freedom and equality for all. It is what makes America strong and what makes the American Experiment unique.

Our diplomats have to respond to why African-Americans are still lynched in the 21st century in America if they are to speak about human rights in other countries. Just because we are ignoring the plight of our minorities does not mean we can claim the high moral grounds.

Today, we are paying a high price for neglecting to protect the rights of all Americans. Equally. How can we call ourselves the champions of human rights while simultaneously killing intentionally African-Americans at home? The math simply does not add up no matter how much we spin the message. Something, we are certain, our President is far from understanding.

THE GENERATIONAL GAP IS CLEAR

Watching multi-ethnic, Generation Z protesting the killing of George Floyd across this nation is a moment our sociologists are noticing with sheer delight. The gap between an old white Caucasian male in this country, that Trump represents, and the new Caucasian generation rising gives us all hope that the country is changing drastically.

This new Generation Z ascending that numbers 23 millions is truly remarkable. Not far behind them is Generation Y which tops 71 millions. Both generations of Americans have instinctively shed racist hate that some children of Caucasian parents either inherit, or act indifferent to the plight of African-Americans. Most Caucasians in America are totally detached from the reality of what African-American experience in this country. Today, those two generations are shedding their parents racism or detachment. They have become active participants in the social change sweeping America, and are showing the world that their humanity and humility are the real forces behind the new societal norms.

For that, we should applaud them, not gas them with Mace outside the people’s house.

America Needs an Aggressive President Abroad and Not at Home